The clock that is frozen in time: Department of Defense release pictures of the horrific aftermath of 9/11 from inside the Pentagon – including charred offices, candid pictures of Bush and a timepiece that stopped when the plane hit

Thousands of 9/11 victims’ relatives, survivors, rescuers and others are expected to gather Monday at the World Trade Center to remember the deadliest terror attack on American soil

It’s been 16 years since the horrific September 11th attacks that left 2,996 people dead and more than 6,000 others wounded in America.
To mark the harrowing anniversary, the Department of Defense has released dozens of astonishing and rare images showing the aftermath of the attack inside the Pentagon and at the World Trade Center.

They were hit by planes on that fateful morning during a series of coordinated attacks by al Qaeda hijackers.
Another plane, United Airlines Flight 93, crash landed in a field in Shanksville, Pennsylvania, after passengers stopped the terrorists from hitting their intended target.
The powerful photos include candid shots of then-President George Bush as he came to terms with the horrifying attack on the United States.
Two powerful light beams shone through the night on Sunday and early Monday at the World Trade Center in tribute to those who lost their lives. 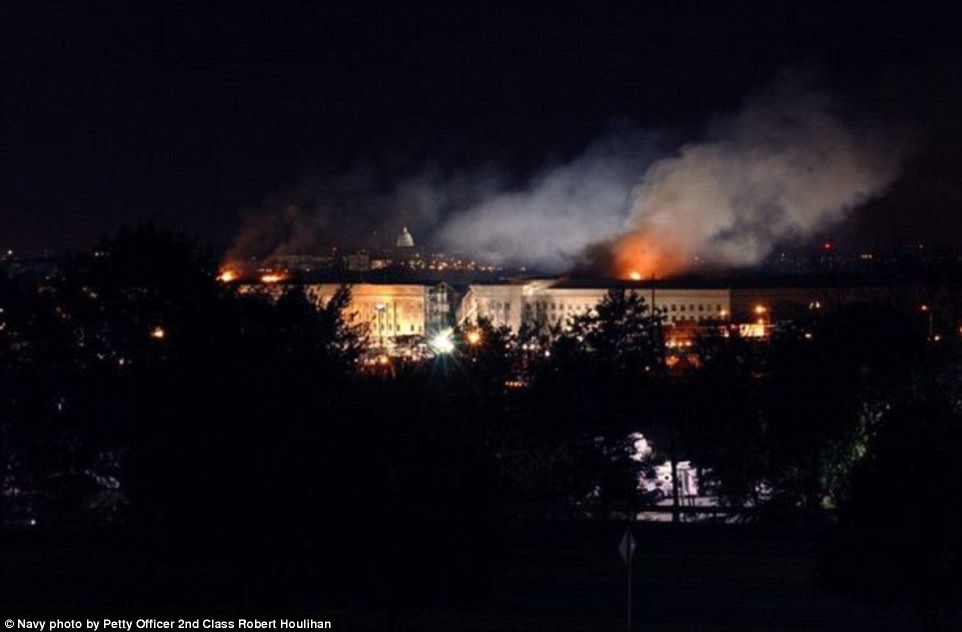 It’s been 16 years since the horrific September 11th attacks happened in America that left 2,996 people dead and more than 6,000 others wounded. Newly released photos show the aftermath of the series of coordinated terror attacks at the World Trade Center, the Pentagon (above) and a field near Shanksville, Pennsylvania 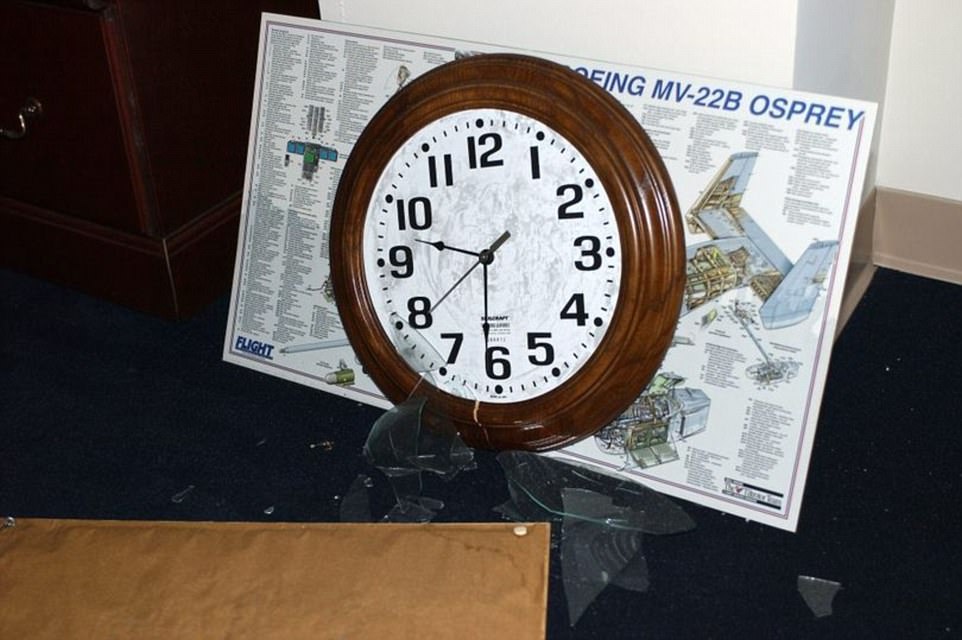 An image of a clock frozen at the time of impact at the Pentagon is pictured above. The image was taken by Sgt. Larry A. Simmons 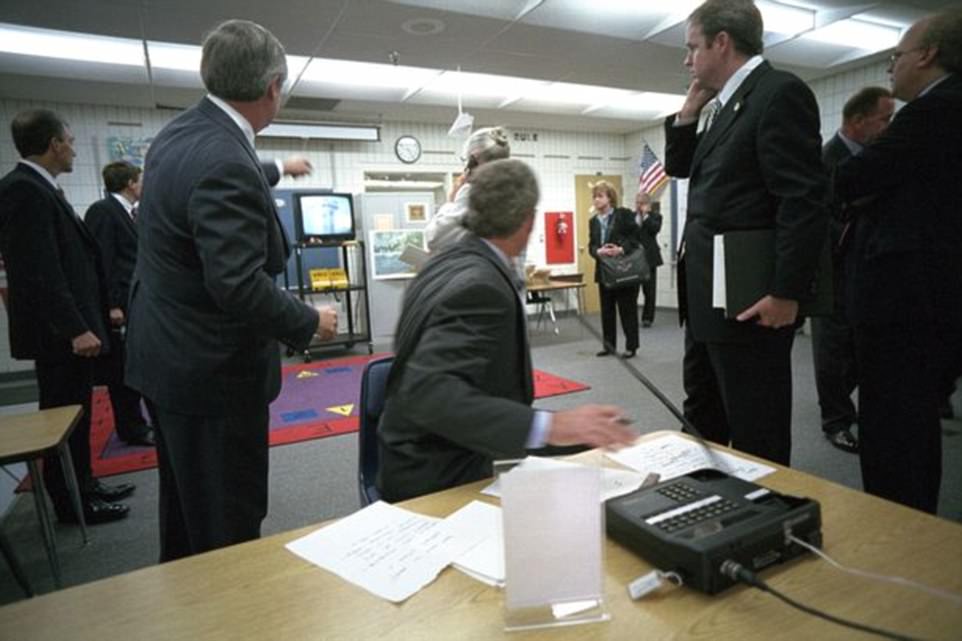 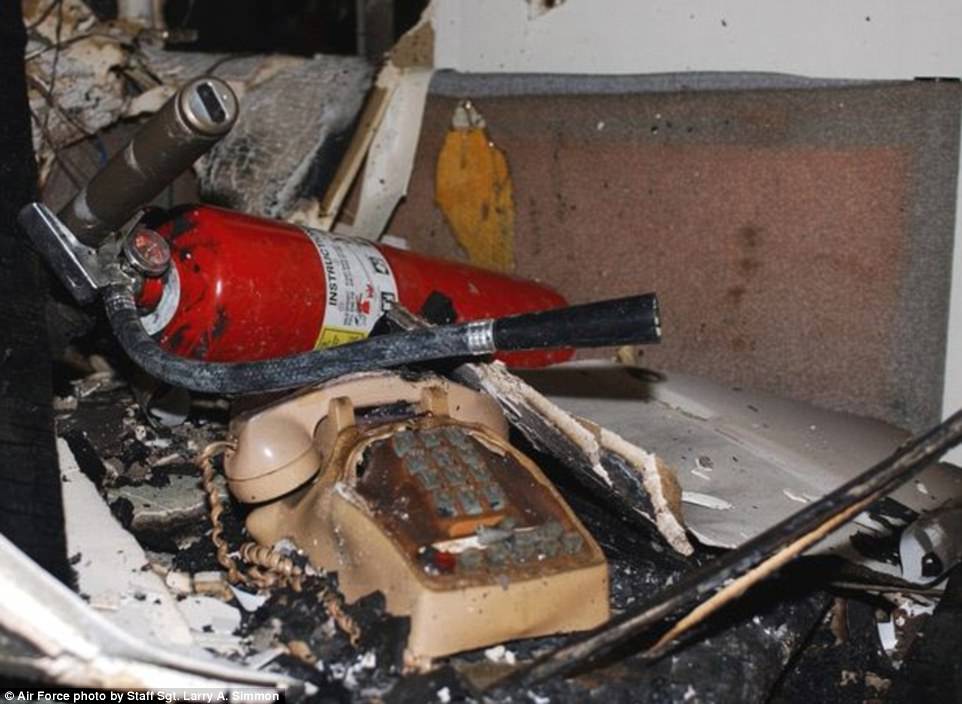 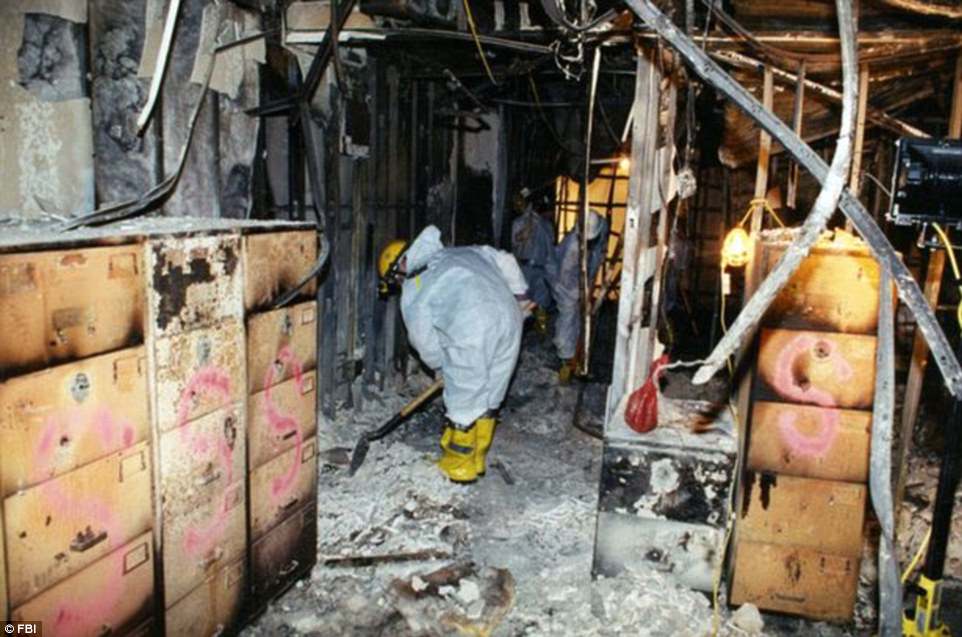 A very normal office building filled with filing cabinets was reduced to twisted metal and ashes, with only the cabinets themselves left standing after the attacks at the Pentagon 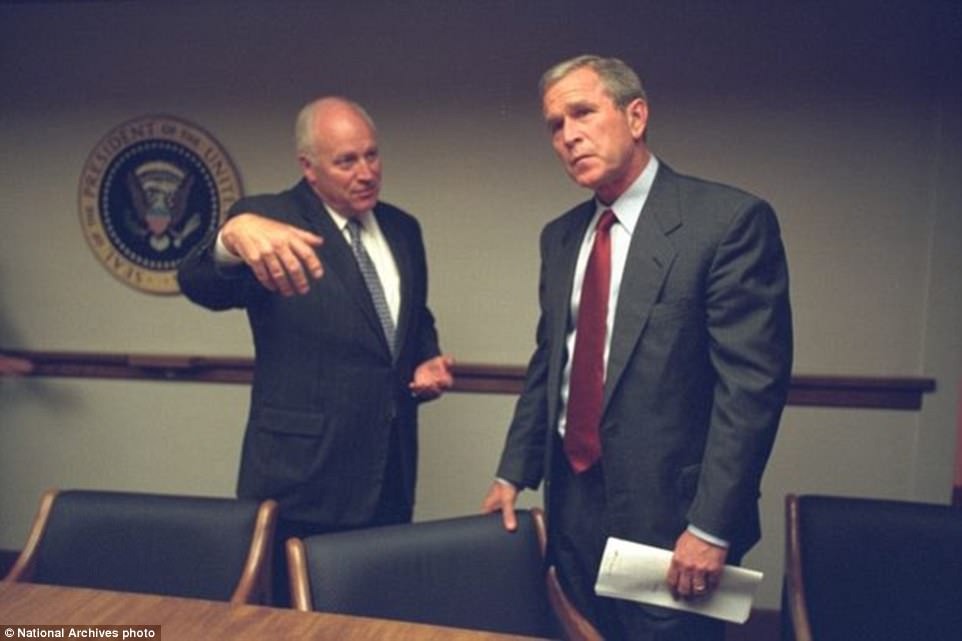 Then-President George W. Bush and then-Vice President Dick Cheney are pictured above having a discussion about the horrific incident 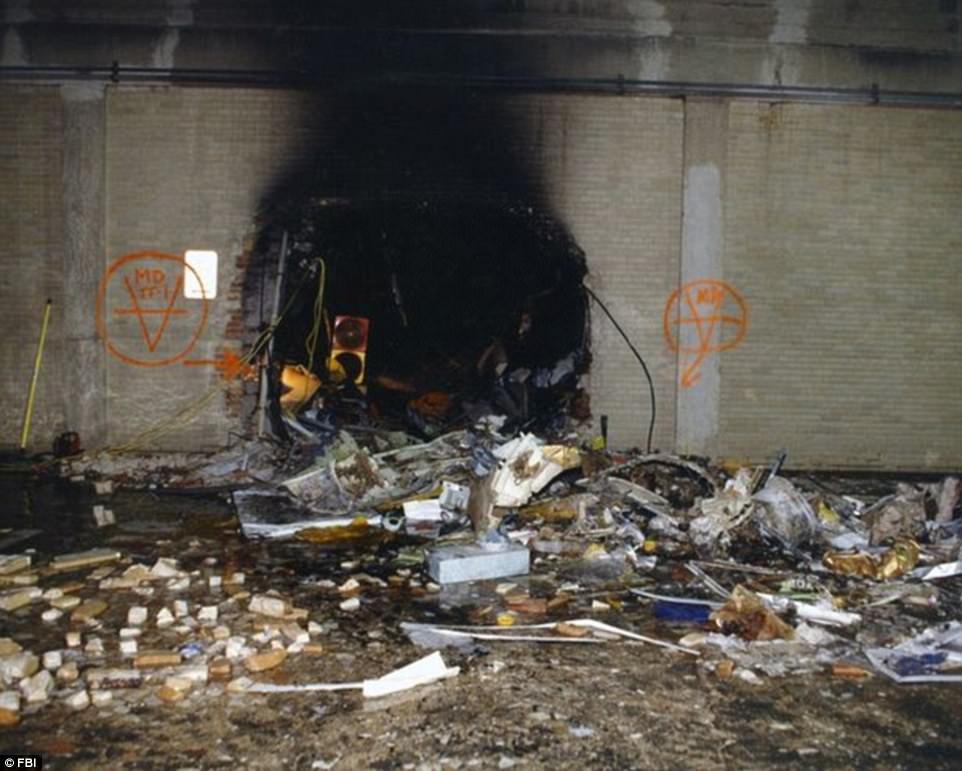 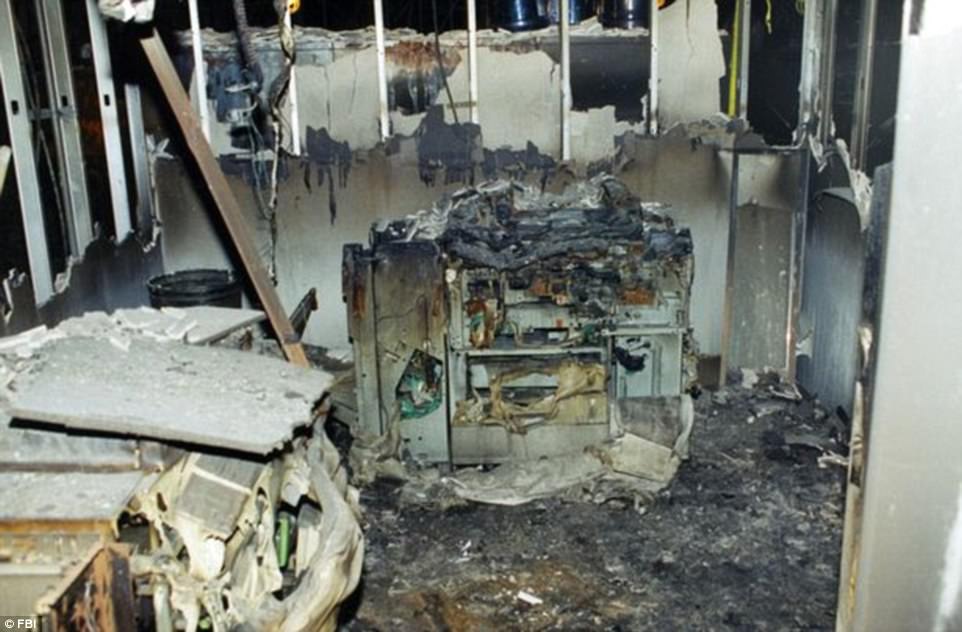 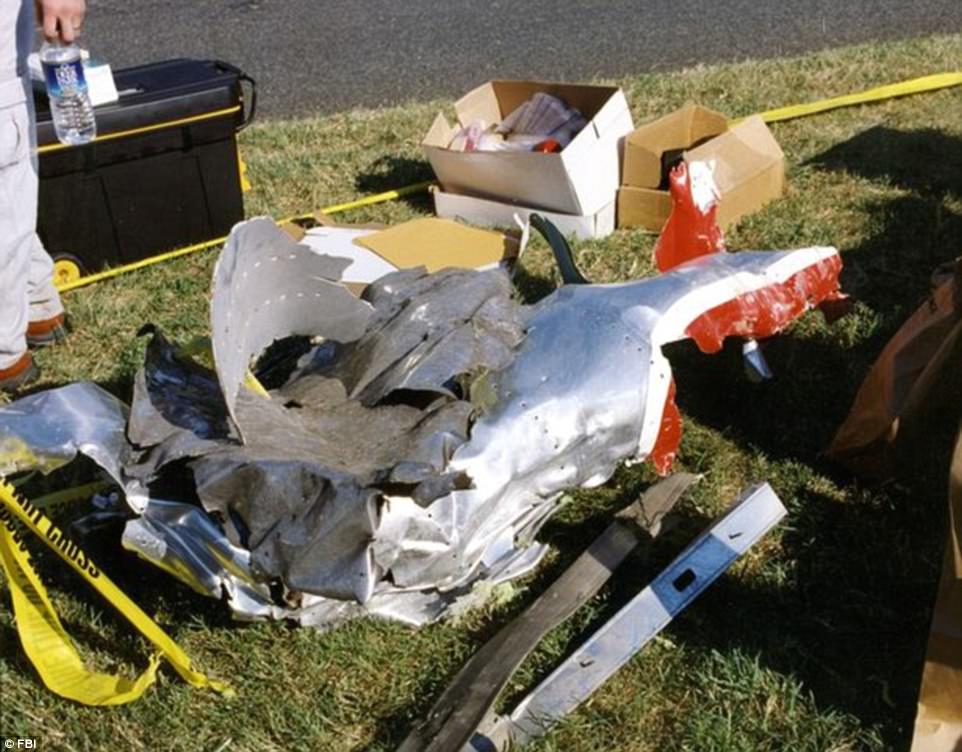 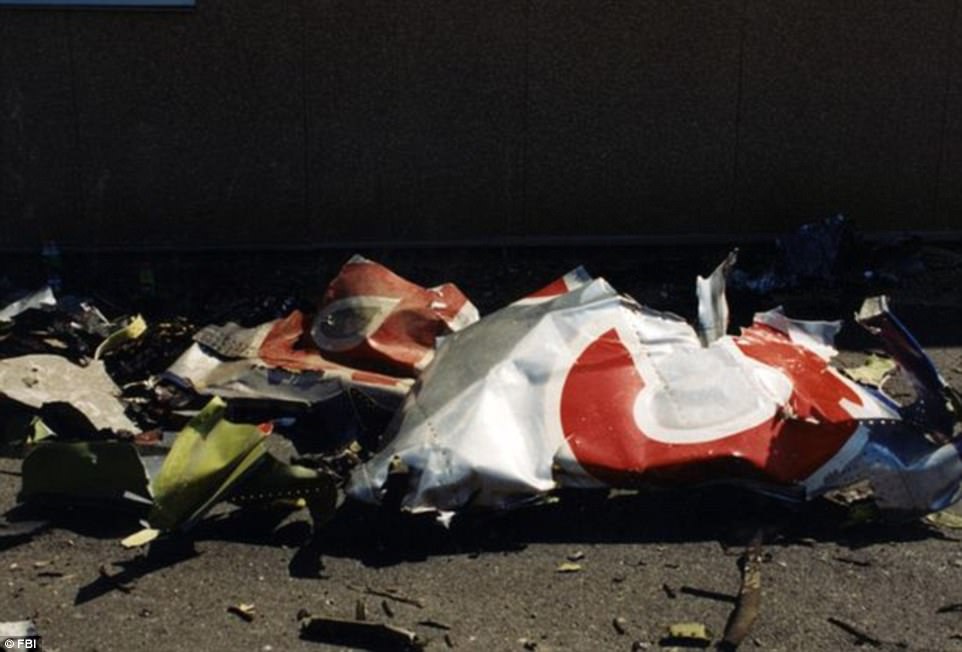 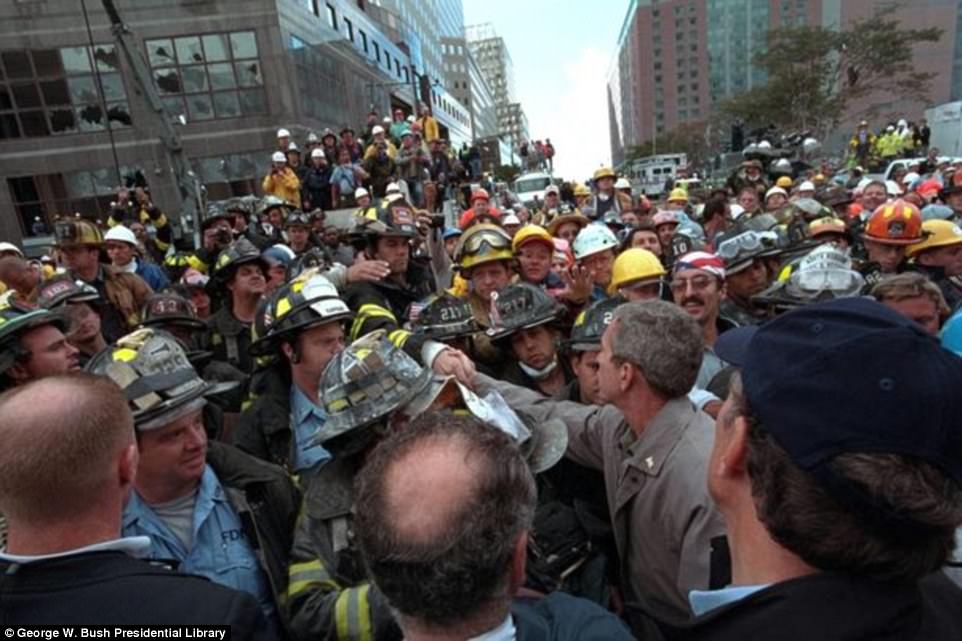 Thousands of 9/11 victims’ relatives, survivors, rescuers and others are expected to gather Monday at the World Trade Center to remember the deadliest terror attack on American soil.
President Donald Trump, a native New Yorker observing the anniversary for the first time as the nation’s leader, is scheduled to observe a moment of silence at about the time the first airplane hit. The White House said he is to be joined by first lady Melania Trump.
He also planned to participate in a 9/11 observance at the Pentagon. Defense Secretary Jim Mattis and Gen. Joseph Dunford, chairman of the Joint Chiefs of Staff, are hosting a private observance for victims’ relatives there at 9.11am Monday.
After the names are read at that ceremony, there’s a public observance, with a wreath-laying and remarks. 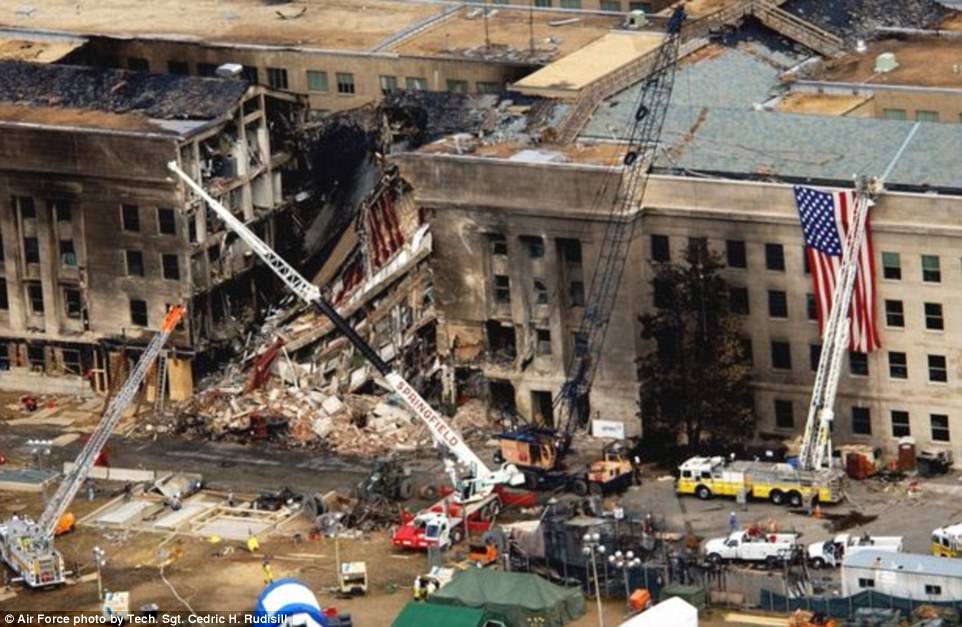 Pictured above is an aerial view of the damage at the Pentagon in Washington, DC two days after the terror attacks 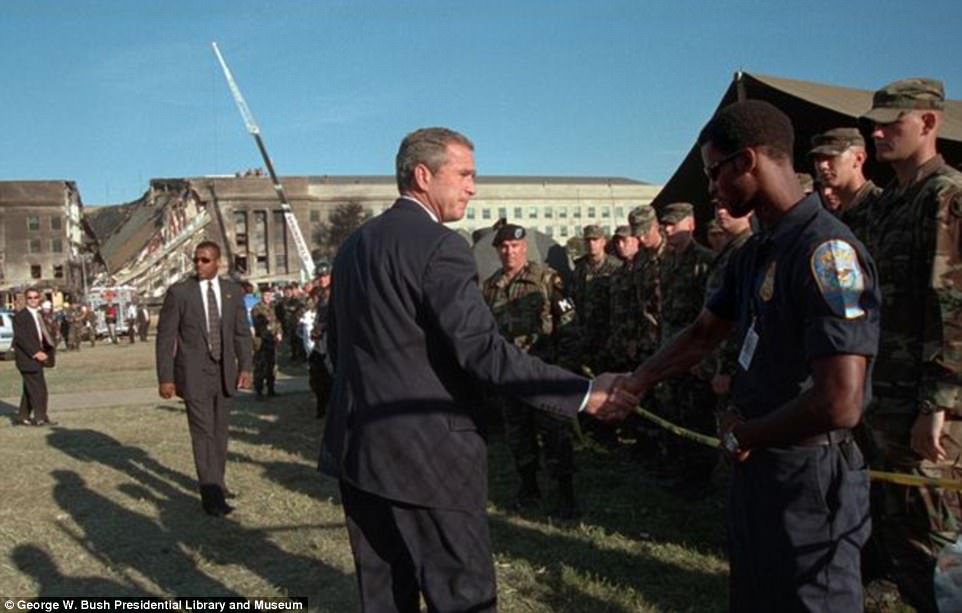 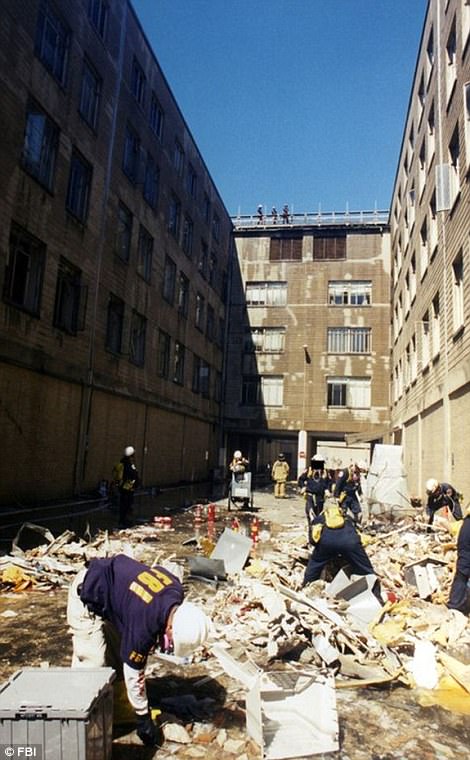 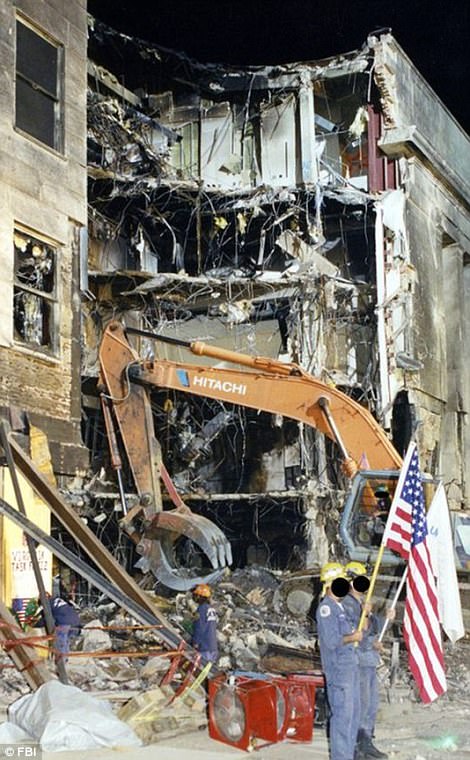 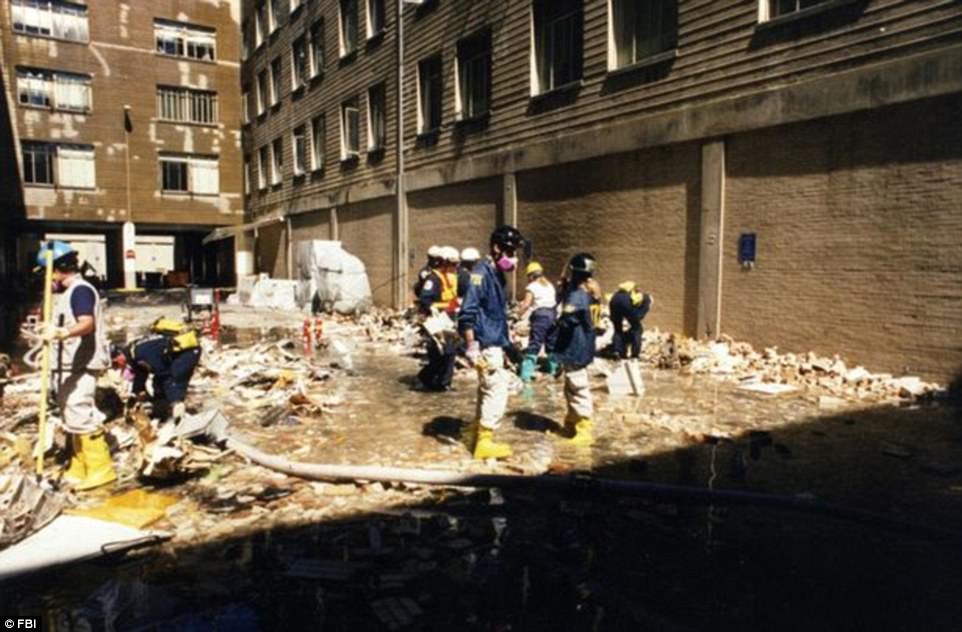 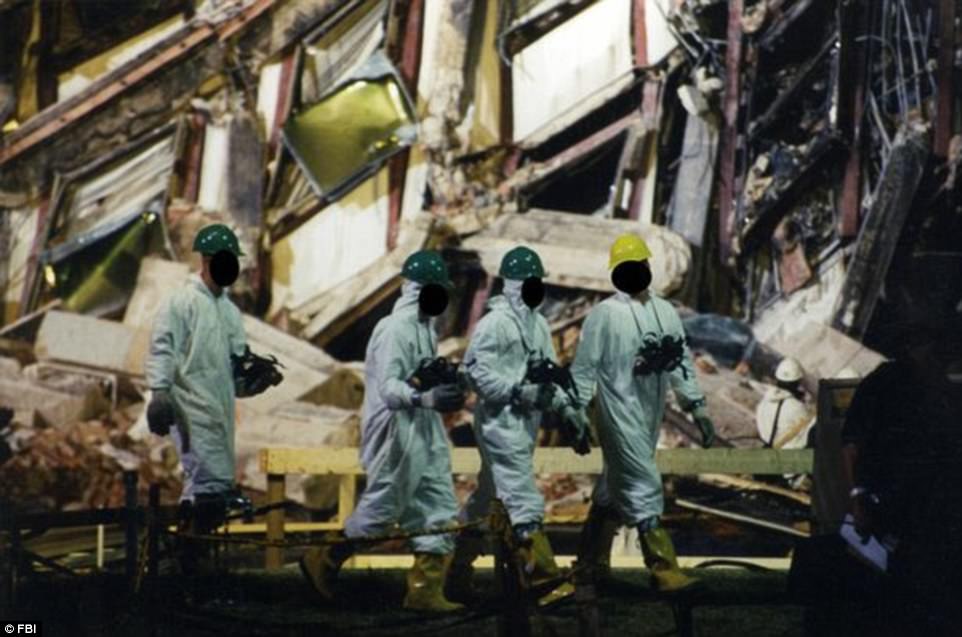 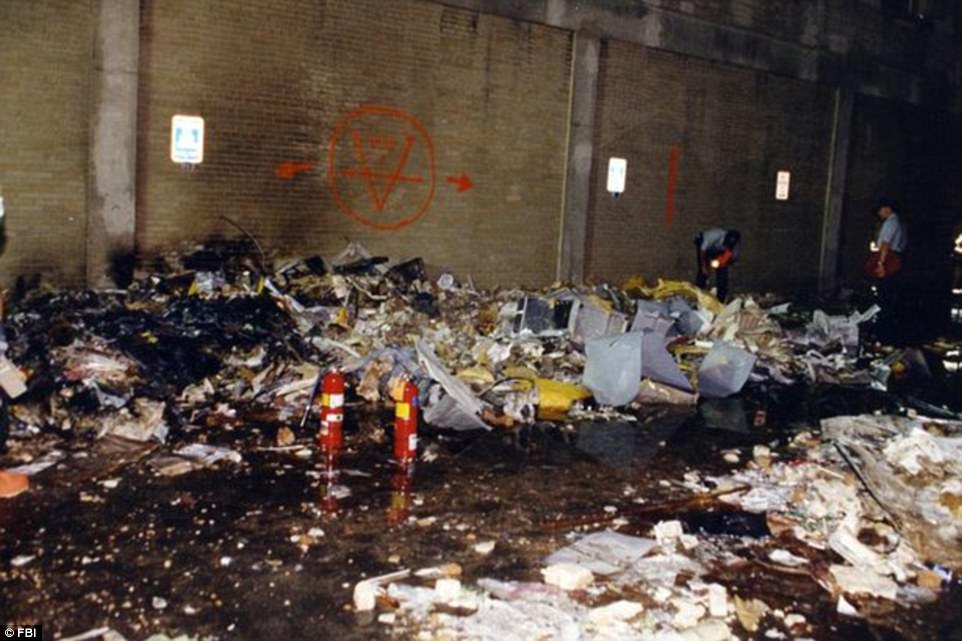 Vice President Mike Pence and U.S. Secretary of the Interior Ryan Zinke are scheduled to deliver remarks at the Flight 93 National Memorial near Shanksville.
It’s on the rural field where one of the airliners crashed after passengers and crew fought to wrest control away from the terrorists who’d hijacked it and were heading for Washington.
Construction continues at the Shanksville memorial, where ground was broken Sunday for a 93-foot tall Tower of Voices to honor the 33 passengers and seven crew members who died.
The ceremony amid the waterfall pools and lines of trees on the National Sept. 11 Memorial plaza strives to be apolitical: Politicians can attend, but since 2011, they haven’t been allowed to read names or deliver remarks. 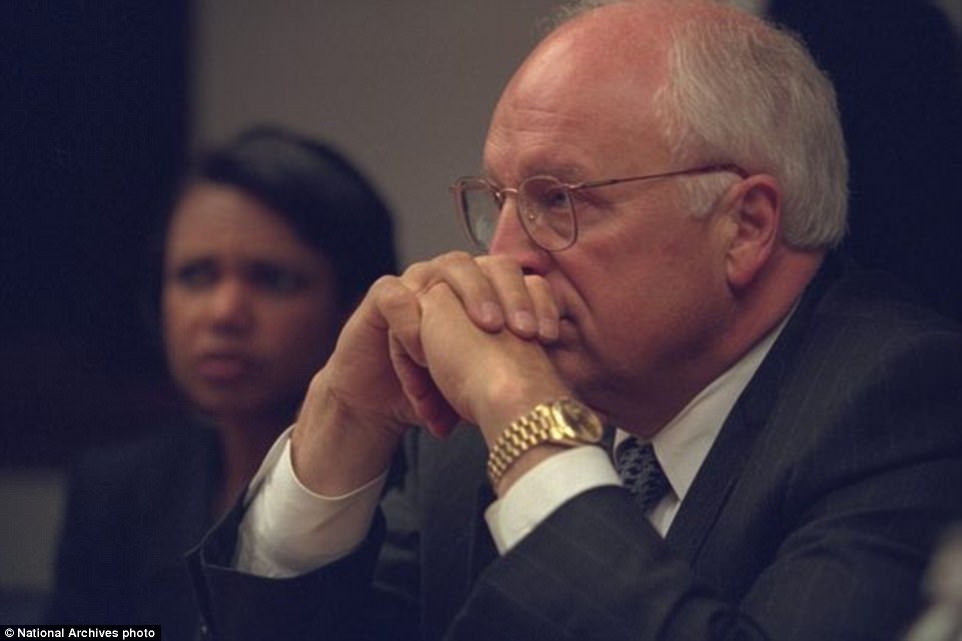 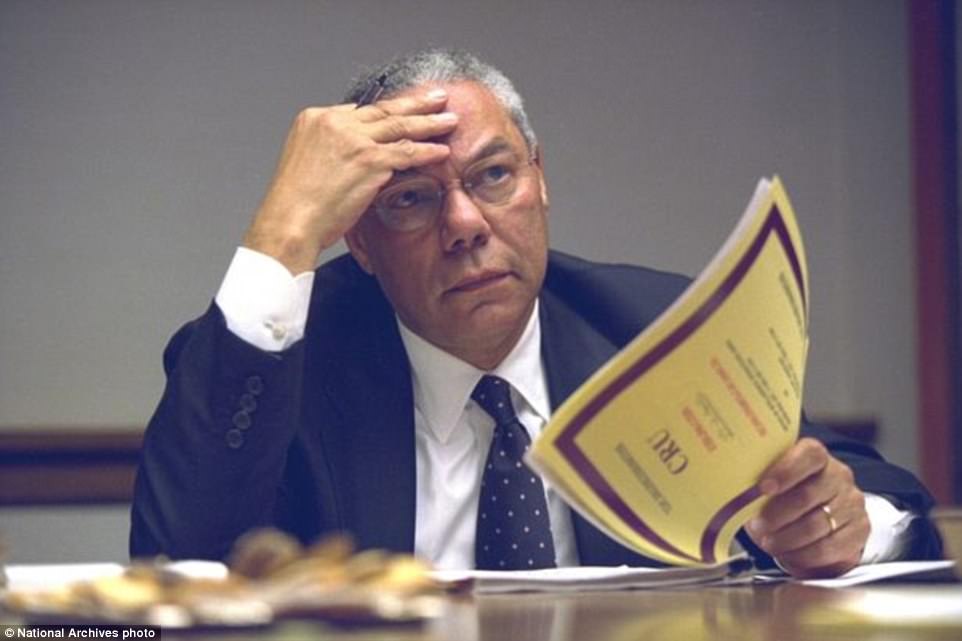 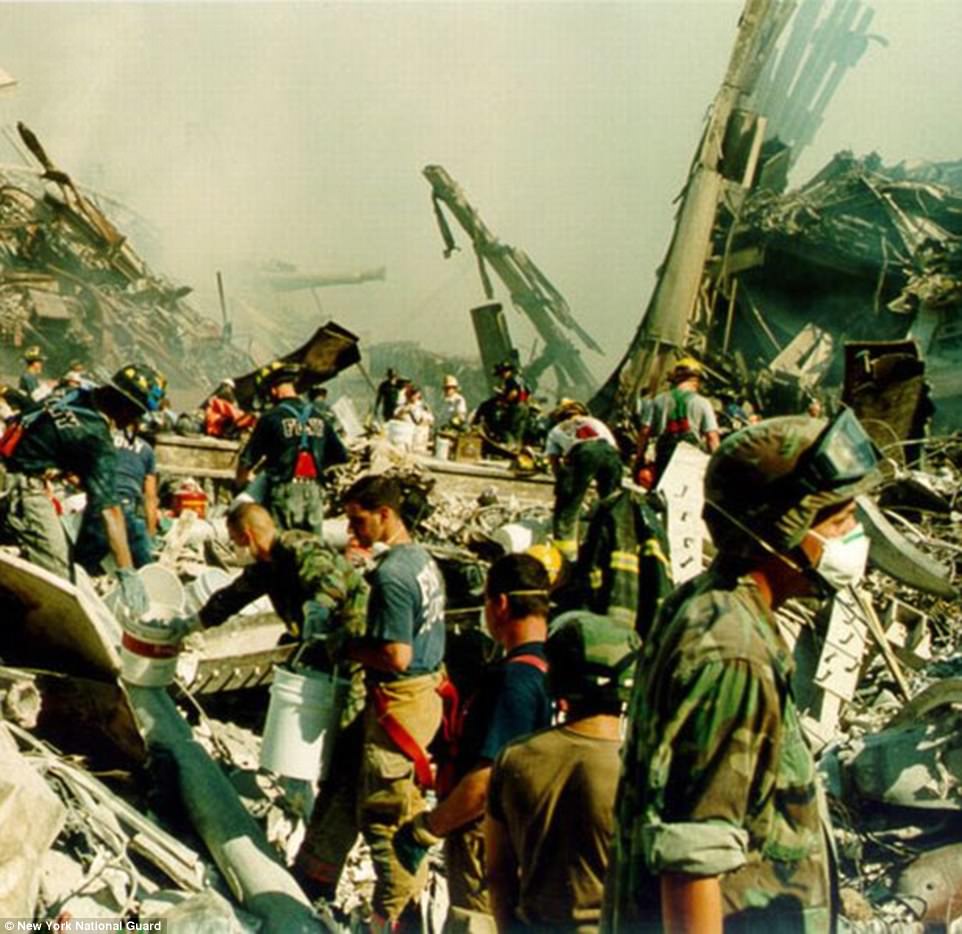 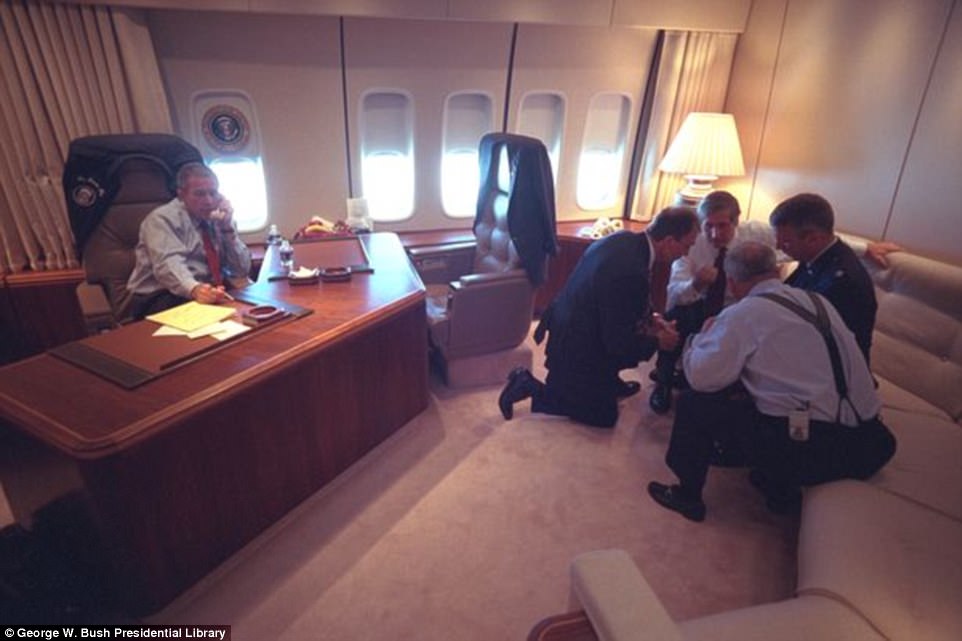 President Bush is pictured above talking on the telephone on September 11, 2001, as senior staff huddle aboard Air Force One 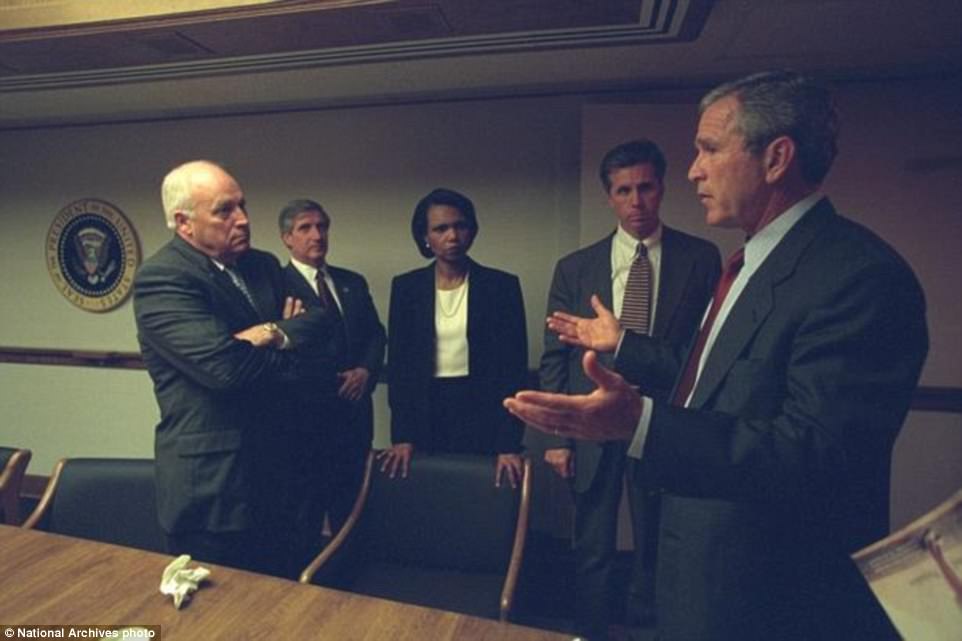 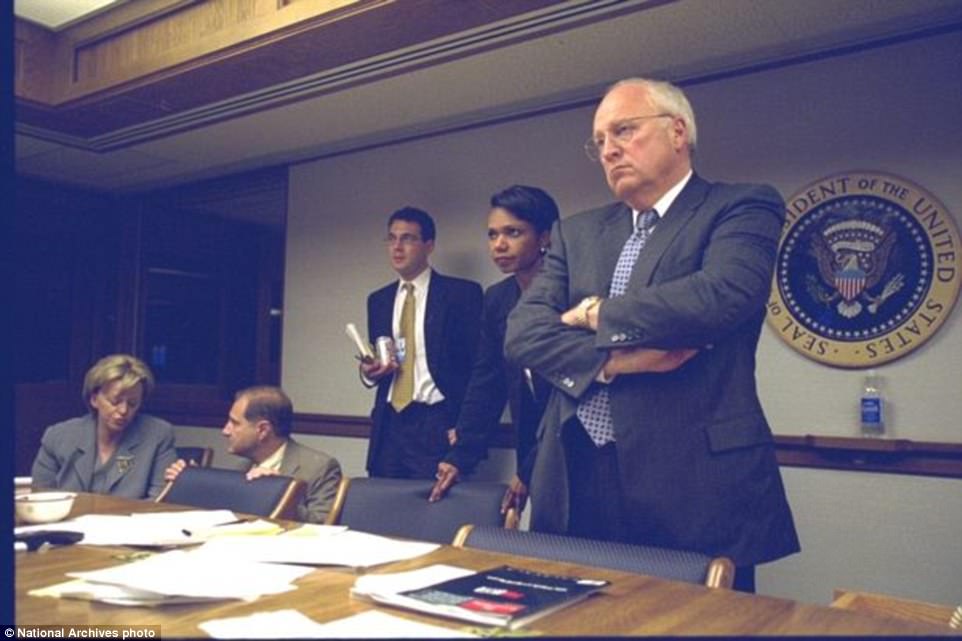 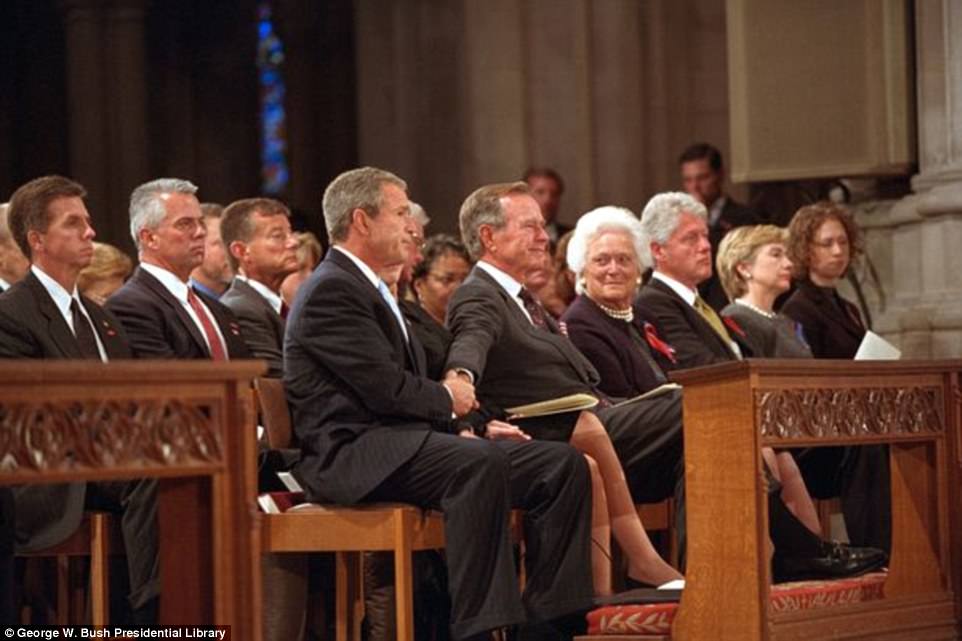 Yet last year’s 15th-anniversary ceremony became entangled in the narrative of a fractious presidential campaign when Democratic nominee Hillary Clinton left abruptly, stumbled into a van and ultimately revealed she’d been diagnosed days earlier with pneumonia.
The episode fed into questions that then-Republican-nominee Trump had repeatedly raised about Clinton’s stamina and transparency.
She took three days off to recover, and Trump used footage of her stagger in a campaign ad.
Trump has often invoked his memories of 9/11 to highlight his hometown’s resilience and responders’ bravery. 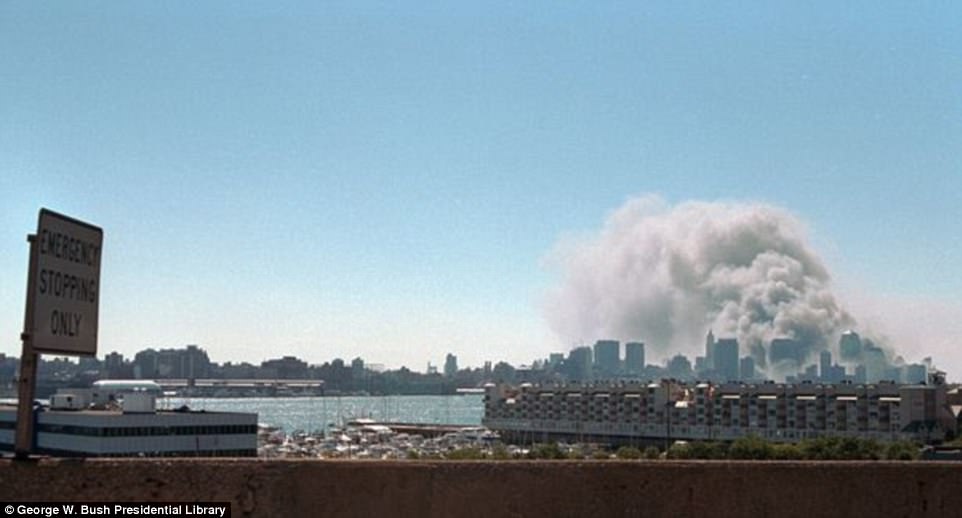 Pictured is smoke rising from the World Trade Center in New York City on September 11, 2001 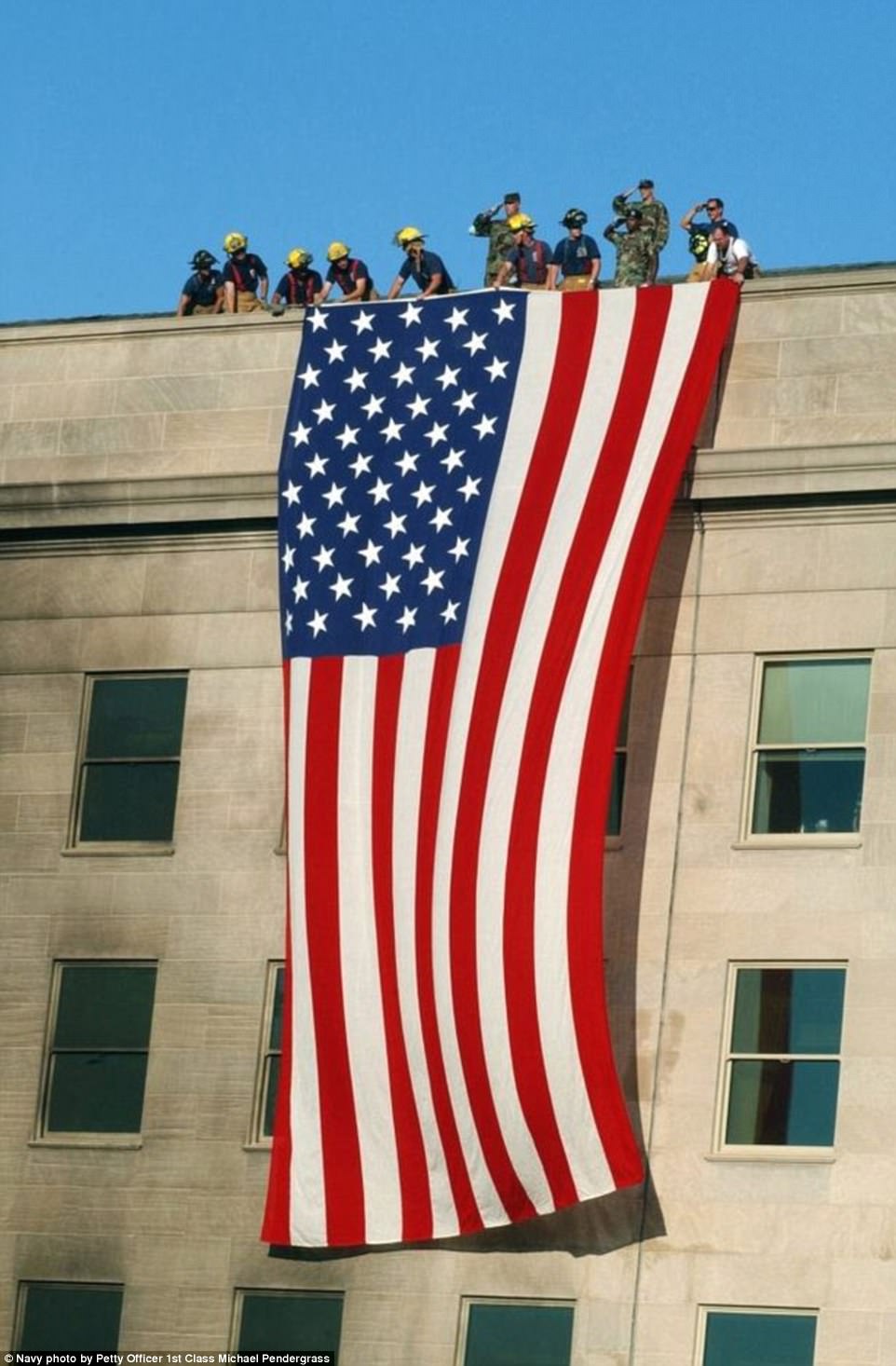 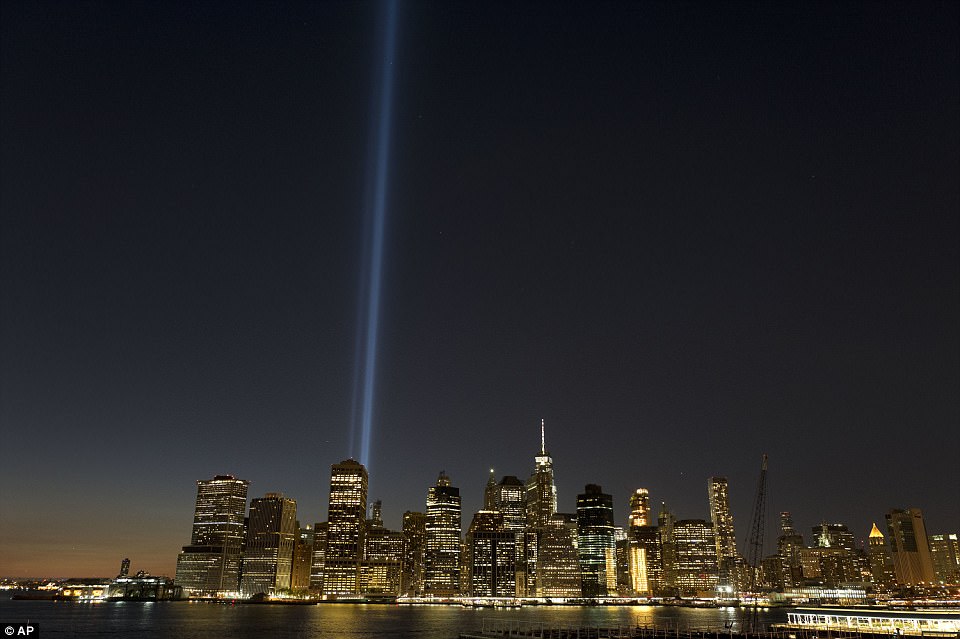 The Tribute in Light rises above the lower Manhattan skyline on Sunday evening, one day before September 11

Some of his recollections have raised eyebrows, particularly remarks while talking about Muslims that “thousands of people were cheering” in Jersey City, New Jersey, as the towers fell.
There is no evidence in news archives of mass celebrations by Muslims there.
Meanwhile, rebuilding and re-imagining continues at ground zero.
The third of four planned office towers is set to open next year; so is a Greek Orthodox church, next to the trade center site, that was crushed by the South Tower’s collapse. Work toward a $250 million performing arts center continues after a design was unveiled last fall.
Most recently, plans were announced this spring to transform a grassy clearing on the memorial plaza into a walkway and area dedicated to 9/11 rescue and recovery workers, including those who died of illnesses years after being exposed to smoke, dust and ash at ground zero. 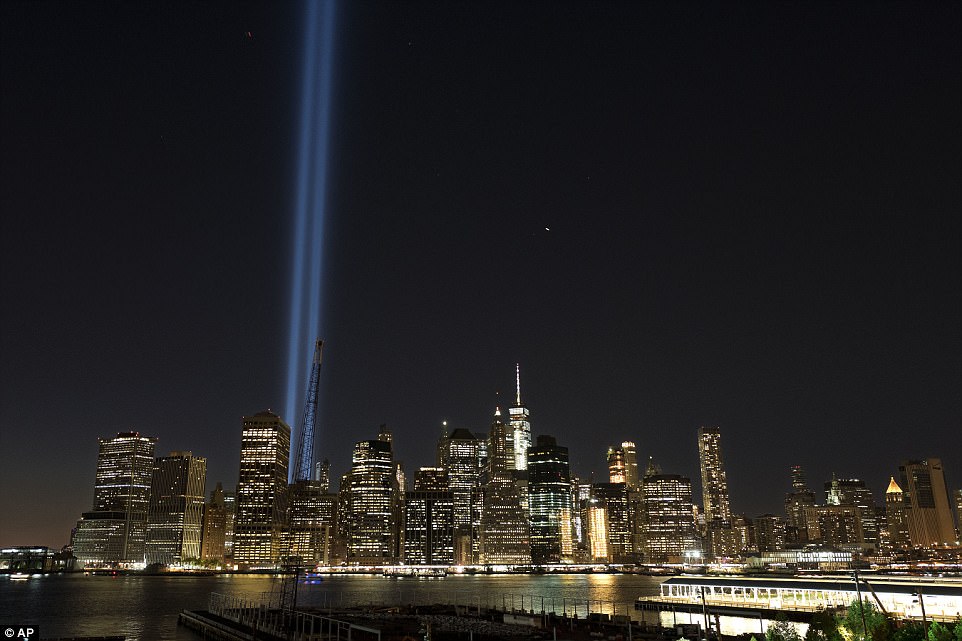 The two blue pillars of light provide a visual reminder of how the Twin Towers, destroyed in the terrorist attacks of September 11, 2001, once stood above the city skyline
source: dailymail

2017-09-12
Rahul
Previous: What “Game of Thrones” Actors Look Like in Real Life
Next: 10 Facts You Probably Never Knew About Airplanes