Press photographer Kevin Carter took a historic picture; the famous picture of a girl who was starving to death, crawling to reach the UN feeding station. In the photograph, one can see a bird of prey waiting patiently to devour the little girl. Carter was awarded but also criticized for his picture.

Carter was born in 1960 in Johannesburg in South Africa. He began working as a sports photographer. Later he decided to work for the Johannesburg Star, bent on exposing the brutality of apartheid.

In March 1993, while on a trip to Sudan, Carter was preparing to photograph a starving toddler trying to reach a feeding center when a hooded vulture landed nearby. Carter reported taking the picture, because it was his “job title”, and leaving. He was told not to touch the children for fear of transmitting disease. After taking the picture, he got up and chased the vulture away. He then sat under a tree and smoked a cigarette crying.

The next day, the picture was published on New York Times. It was heart-breaking and shocked everyone. It immediately became a symbol that described hunger in Africa. However, readers desired to know what happened to the girl. Unfortunately Carter didn’t know…

Some people said that Kevin Carter, the photojournalist who took this photo, was inhumane, that he should have dropped his camera to run to the little girl’s aid. The controversy only grew when, a few months later, he won the Pulitzer Prize for the photo. By the end of July, 1994, he was dead. 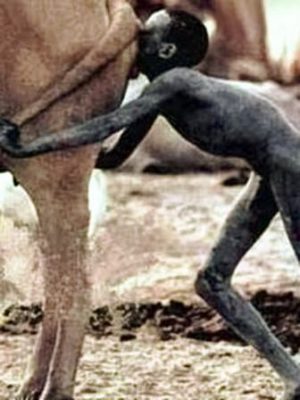 On 27 July 1994 Carter drove his way to Parkmore near the Field and Study Center, an area where he used to play as a child, and committed suicide by taping one end of a hose to his pickup truck’s exhaust pipe and running the other end to the driver’s side window. He died of carbon monoxide poisoning at the age of 33. Carter’s suicide note read:

“I’m really, really sorry. The pain of life overrides the joy to the point that joy does not exist… I am depressed… without phone… money for rent … money for child support… money for debts… money!!!… I am haunted by the vivid memories of killings and corpses and anger and pain… of starving or wounded children, of trigger-happy madmen, often police, of killer executioners… I have gone to join Ken if I am that lucky”.

2017-04-20
Rahul
Previous: How to Have a Happy Relationship According to Science
Next: 5 Brainy Books to Read If You Want to Be a Badass