# Hospital who treated him is launching investigation after photos leaked online

A fitness fanatic was rushed to hospital after getting his penis stuck in a hole in a weight.

The unnamed patient was rushed to hospital, where doctors called in firefighters to free his purple and swollen genitals.

They spent three hours using specialist equipment to free him from the 2.5kg (5Ib 8oz) weight.

They used a grinder and vibrating saw to remove the device.

It is not known how exactly the man managed to get his penis stuck in the plate.

The pictures of the unfortunate mishap emerged after they were leaked online. 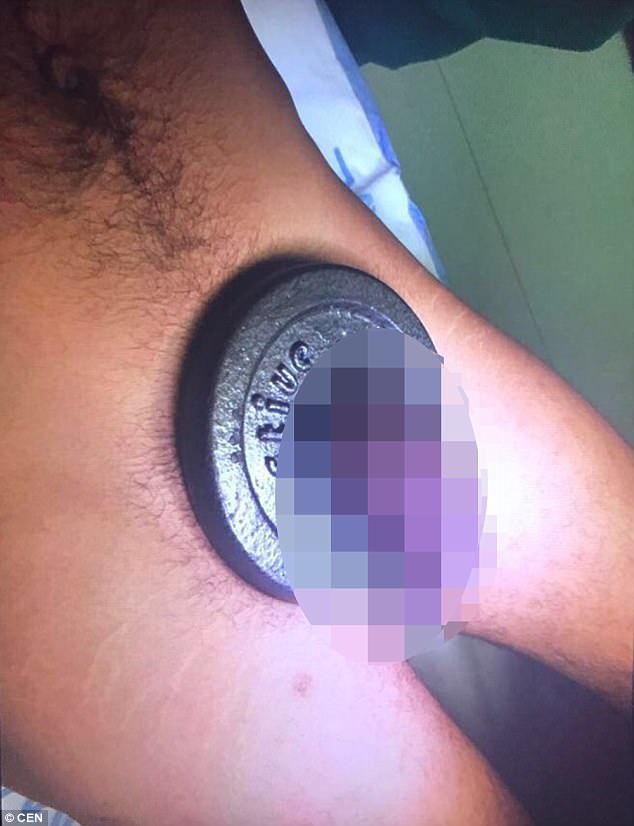 The weightlifter went to a hospital in Worms, Rhineland-Palatinate in Germany, with the delicate problem.

The image of the man’s genitals was supposed to be for official use only but it has ended up all over social media.

The hospital that treated the man has launched an investigation to find out how they were leaked. 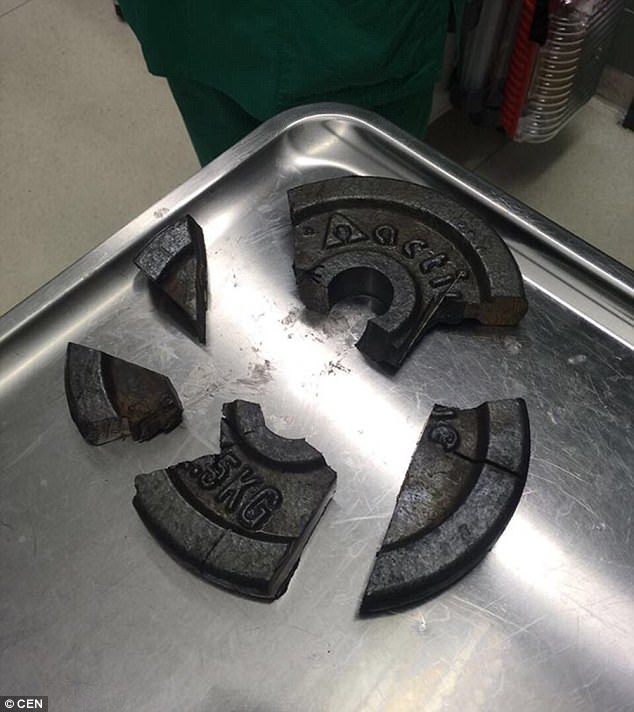 Firefighers took three hours to remove the 2.5kg weight from the delicate area

As well the as the picture of the man’s painful-looking penis, another image shows the weight after being shattered to remove it from him.

The fire brigade, after freeing the man, shared an image of the broken disk, describing it as a ‘curious training accident’.

A spokesman for the fire brigade said: ‘How delicate some of our firefighters can be was shown when we called in support of the hospital.

‘One person had a very sensitive body part wedged in the hole of a 2.5kg dumbbell disc.

‘The dumbbell weight could be removed after three hours with the help of a grinder, a vibration saw and a hydraulic rescue device.’

Dumbells and barbells often come with plates or disks on varying weights, allowing the user to adjust the load.

THE RISKS OF GETTING YOUR PENIS STUCK IN SOMETHING

A penis that gets trapped can become swollen because the flow of blood has been blocked.

This can cause blood vessels to burst, causing discolouration of the skin.

There is a danger that the cells and issue could die – called necrosis – due to lack of oxygentated blood flow.

Worst case scenario, it may have to be amputated.

Last year, this happened to a man who used a plastic bottle as a sex toy and got his penis stuck in it for four days.
By the time he reached the hospital, his genitals had turned black and had started to decay.
credits:dailymail

2017-11-14
Rahul
Previous: Entire Family, Who Ran Holistic Healing Company Fighting Big Pharma, Found Dead
Next: This Soldier’s Wife Cheated On Him With 60 Different Men. So He Served Sweet Justice Like No Other