On June 11, 1963, Vietnamese Mahayana Buddhist monk Thích Quảng Đức lit himself on fire in a remarkable act of protest against the violation of religious freedom and the persecution of Buddhists by the Vietnamese government.

In the busy intersection, surrounded by 350 monks and nuns, Quảng Đức assumed the lotus positioned and lit the flame.

The original image, captured by Malcolm Browne, was shot in black and white. The emblematic image received the Pulitzer Prize for its emotional impact and the eye-opening message that it spread across the globe.

The image was widely circulated and brought some much needed attention to heinous Diệm regime policies.

Now, thanks to a humble reddit user, the image has been given a new sense of life and yet another opportunity to convey the difficulties faced by the Buddhists of Tibet. 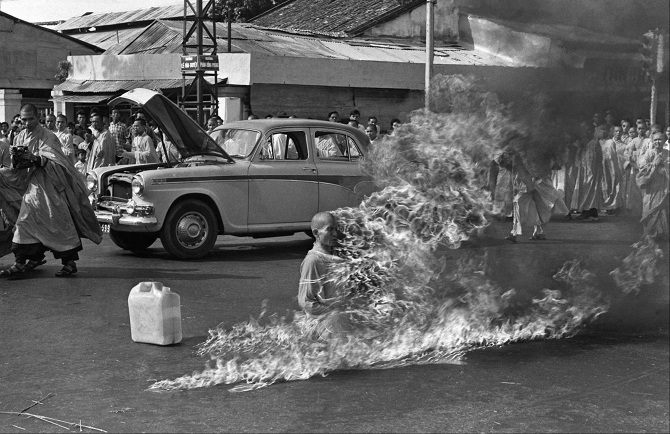 After his compelling sacrifice, Quảng Đức’s remains were re-cremated, a process during which his heart remained in tact and has since been viewed a sign of holiness.

His final words were documented in a note that he had left behind:

Before closing my eyes and moving towards the vision of the Buddha, I respectfully plead to President Ngô Đình Diệm to take a mind of compassion towards the people of the nation and implement religious equality to maintain the strength of the homeland eternally.

I call the venerables, reverends, members of the sangha and the lay Buddhists to organize in solidarity to make sacrifices to protect Buddhism.

2017-10-16
Rahul
Previous: She begged for the ship to honk its horn, 10 Million Have Watched Her Regret It Immediately
Next: 5 Hollywood Stars Who Used Body Doubles To Shoot Intimate Scenes