The white supremacist rally in Charlottesville, Virginia left one person dead and dozens injured, shining a harsh light on racism in America.

A car ploughed into an anti-fascist protest which resulted in the death of 32-year-old Heather Heyer, who had attended to protest one of the largest neo-Nazi gatherings in a decade.

Men and women from the counter-protests were seen stretched out over gurneys and bleeding. 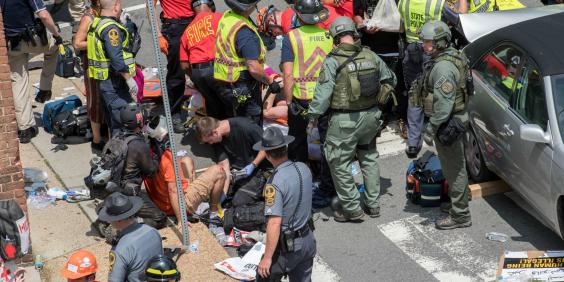 The cause for the ‘Unite the Right’ protests was the removal of a statue of Confederate general Robert E Lee – a hero among nationalists. The gathering was given the go-ahead by a court, and anti-fascist protests were set up to take place alongside.

Journalist Shaun King has been appealing for help in finding a group of people who have been captured on video violently assaulting black protester Deandre Harris.

The twenty-year-old defended himself against five attackers who shouted racial slurs as they beat him with metal flag poles.

Seven days after the beating, every single man who assaulted him remains free.

Harris’ GoFundMe page, which has been set up to pay for his extensive medical bills, read:

I was chased and beat with metal poles. I was knocked unconscious repeatedly. Every time I went to stand up I was knocked back down. If it was not for my friends that I came with I would have been beaten to a pulp. No law enforcement stepped into help me.

King has pointed out the following with two pictures:

She put a strap around the neck of a white statue. Arrested in 24 hours.

BUT THESE MEN ARE STILL FREE. No warrants. No charges. NOTHING.

She put a strap around the neck of a white statue. Arrested in 24 hours.

BUT THESE MEN ARE STILL FREE. No warrants. No charges. NOTHING. pic.twitter.com/TiyZpnHycL

The second image is a photograph of North Carolina Central student Takiyah Thompson, who was arrested on a felony and misdemeanour charges for her wrapping a rope around the neck of a confederate soldier statue.

The Federal Bureau of Investigation (FBI) in Richmond is appealing for information about the incident.

President Donald Trump’s response to the tragedy was questionable, to say the least:

◀ 7 things you should never say to a sex worker
Did King Robert Predict Every Stark’s Fate In The Very First Episode Of ‘Game Of Thrones’? ▶