How To Safely Send Nudes

If you’ve ever sent or received a sext, you’re not alone. In a 2013 study, about 27% of all smartphone users said they receive sexts on a regular basis, and 12% admitted to sending nudes (though the people polled may have been being coy). That number may even be higher now, as the study came out just as Snapchat, then an ephemeral multimedia messaging platform built around disappearing photos and video, was taking off.

This is a judgment-free zone. If you want to send a nude (and have a willing participant), then send a nude. There’s nothing wrong with nudity! Human bodies are beautiful! But it’s also totally normal to want to maintain control of the way your nudes are seen and distributed.

The only way to truly control your nude distribution is to do it yourself. Just follow these simple steps: Take a pic of your goods, download the pic to an encrypted hard drive, drop in a password-protected folder, confiscate your partner’s phone, show them the image, close the file, return their phone, and proceed.

But that’s deeply unsexy! And also not how sexting works.

If you decide to send nudes, you assume the risk of those nudes ending up in a public forum, and should prepare yourself for the worst case scenario — but you can significantly lower that risk by following this guide to best practices for ~sensual~ electronic communication. These tips don’t offer a complete guarantee that your nudes won’t be leaked, but they are a good First Line of Defense Against the Dark Interwebs.

One note: If you’re under 18, never, ever, under any circumstances, share a photo of yourself naked. You can be prosecuted as a sex offender, even for sending a picture of yourself consensually.

Here is the most important sexting advice of all: Only send NSFW content to people you trust. Does the recipient seem like someone who would publish your nudes as revenge or use them as blackmail? Do they seem like they take basic security precautions with their devices (see: tip #2)? Are they generally …trustworthy?

You can use apps that employ the most secure end-to-end encryption available, but it won’t matter if the person on the other end takes a screenshot, and “accidentally” posts it to Twitter. So make sure that the person you’re sending your Anthony Weiner to is someone who understands the value of the safekeeping of your selfie.

2. Add a passcode to your phone and encourage your sexting buddy to do the same.

Because, duh! If their (or your) phone is ever stolen and left unlocked, your nudes might end up in the wrong hands.

3. You won’t always know when someone screenshots your sext. Yes, some services will notify you, but there are many ways to get around this. 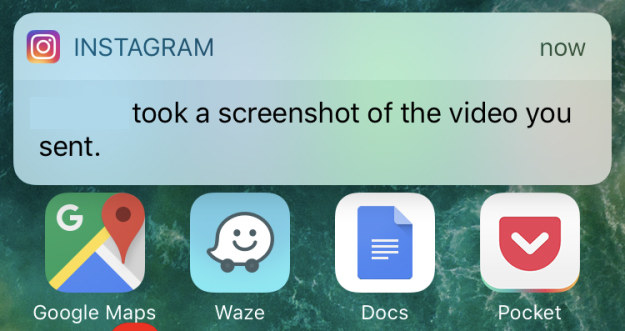 Snapchat will display a particular icon (an arrow with spikes) when a screenshot of your Snap has been taken. Instagram will also notify you if the recipient of a “disappearing” Instagram direct message takes a screenshot.

However, neither of these notification features prevent someone from taking the screenshot in the first place, and they could easily take advantage of the app’s biggest loophole: taking a photo of the screen with another device.

4. Apps that are fully encrypted will prevent hackers from procuring your nudes, but they suffer the same pitfalls.

Messaging apps that employ end-to-end encryption, like Signal and WhatsApp, are great for protecting your various states of undress from hackers and government surveillance. But don’t be fooled: These apps don’t offer tools that prevent screenshotting or taking photos of the screen. Signal disables screenshotting by default on Android, but turning off screenshots is not an option on iOS.

5. Some apps make it more difficult to save photos — but they’re not fail-proof. 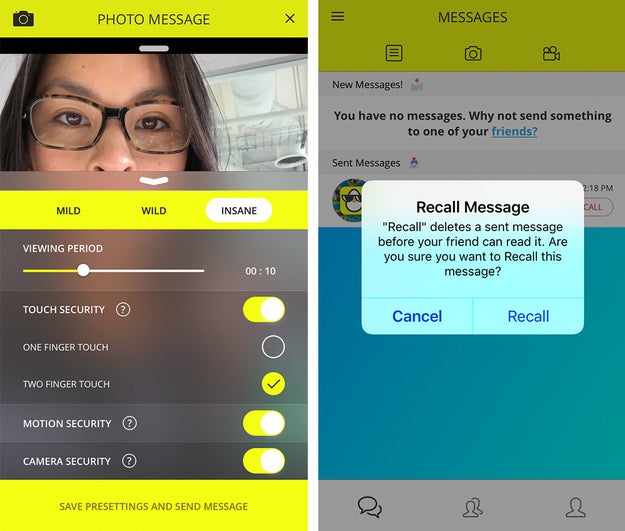 I’d recommend using an app with audited, full encryption (like Signal or WhatsApp) and deleting the photos and videos right after they’re sent, but these apps are also good options for adding another layer of security.

Privates (free, iOS) is a good app for preventing screenshotting. It has some anti-screenshot measures that make it hard to capture the screen without the assistance of another person. You can set your photo to expire, and add different levels of security to it, like requiring the recipient to tap two circles repeatedly to view the photo for short bursts of time, line the phone up to their face, and keep the phone very still. You can choose to protect the photo with one security measure, or all of them at once.

DiscKreet ($3, iOS) will ensure that unauthorized friends, family members, or thieves aren’t looking at your nudes by using a two-password system. To view intimate recordings, each participant has to enter in their unique passcode at the same time. Every time you want to view a sent photo, you’ll need to request the sender’s permission first.

Bleep (free, iOS and Android) is an app that’s ideal for people who want their images to self-destruct after they’re received. It’s made by the filesharing company BitTorrent, uses peer-to-peer communication, and doesn’t store messages on the cloud. It has a “Whisper Mode” that makes photos disappear as soon as they’re seen. When a screenshot is detected, it blurs the name of the sender (which isn’t *super* helpful, but provides at least one line of defense).

6. If you are using a chat app, see if there’s an “incognito” or “secret” mode that won’t record your history. 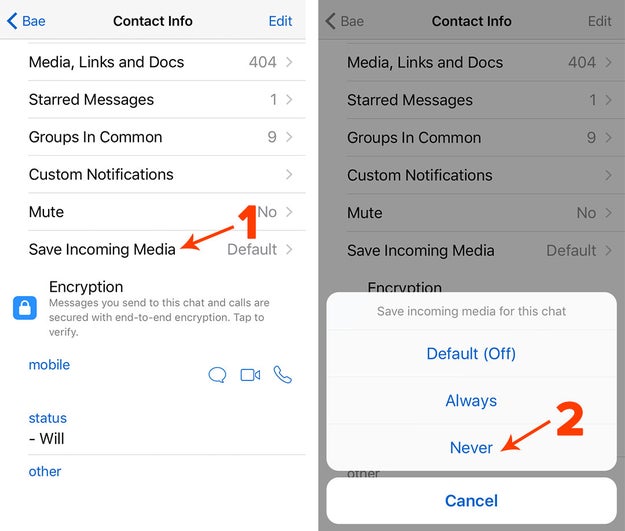 In WhatsApp, open a conversation and tap the recipient’s icon to set Save Incoming Media to Never and Clear Chat. These settings only delete the images from your phone (and not your sextee’s), so teach them how to do the same.

In Signal, you can turn on Disappearing Messages by opening a chat and tapping the recipient’s name. 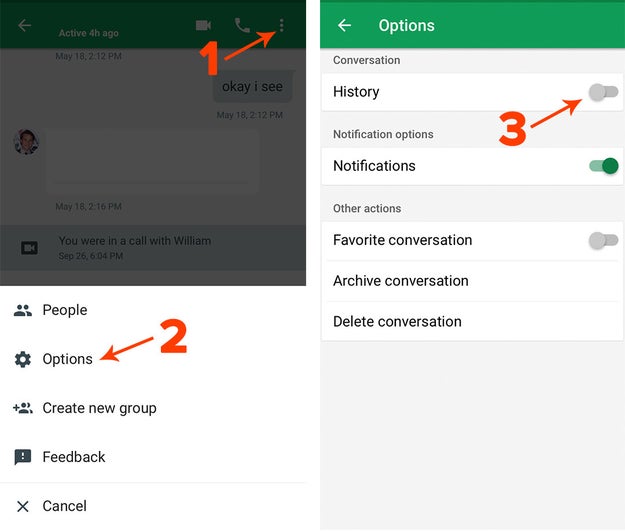 In Hangouts, open the chat and click on the three dots icon, then Options, to turn off conversation history.

In Google Allo’s settings, you can enable Incognito Mode, which turns on end-to-end encryption.

In Facebook Messenger, you can enable encryption by using a feature called “Secret Conversation.” You can get to it by tapping the (+) to start a new chat > Secret > select the recipient.

7. Make sure your face isn’t in the photo to anonymize it.

Don’t be tempted by the full-frontal mirror selfie. They already know your face is cute, anyway. Show the people what they really want: YOUR BOD. Think creatively and point your camera down. Be aware of other identifiable details like tattoos and distinctive piercings, too.

And if you do capture those identifiable details, try using Microsoft Paint or the built-in Markup tool in the iPhone Photos app (open the photo > settings (the middle right button) > three dots icon > Markup), to cover them up with some scribbles. 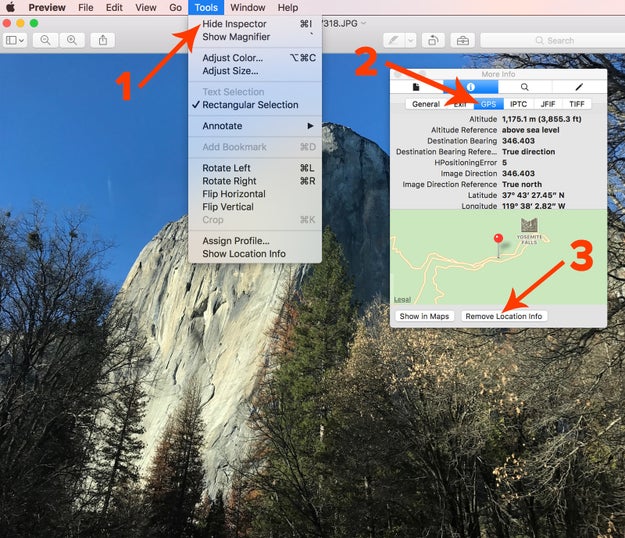 Your nude could easily be traced back to your house using something called EXIF data, which is embedded in every image file and can include location.

This information can’t be removed on the iPhone itself without a third-party app like Photo Investigator (free) or Metadata Cut (free), but it can be removed on your Mac. Open the image in the Preview app > type command + i (or go to Tools > Show Inspector). Select the GPS tab, scroll to the bottom, and click Remove location info. You can also do this on a Samsung device by going to Gallery > More > Details > in the location section, tapping the minus (-) button > Done.

9. Be sure to double-check services that automatically backup your photos.

If you use Flickr, Google Photos, or iCloud Photo Library, prevent those services from auto-syncing your photo library before taking your nudes. Send the selfie, delete it, then re-enable backup.

Additionally, if you use WhatsApp and have opted to backup chats to iCloud or Google Drive, sent images will remain in the cloud, even after you’ve deleted the individual message from your phone. You’ll have to delete the chats manually from your cloud service account.

10. And, last, learn how to save those nudes safely – and teach your partner how to, too.

If you must, the best way to save your most sensitive photos is through the aforementioned method: on an encrypted hard drive in a password-protected folder.

On a Mac, it’s fairly simple. Open the Disk Utility app. Go to File > New Image > New Image From Folder and select the folder you want to protect. Under Encryptionoptions, select 128-bit AES encryption and add a password. Don’t forget it! You won’t be able to recover it if you do. Under Image Format options, select read/write so you can still add and delete photos at your leisure.

You can do it for individual files too, through the Preview app. Go to File > Export as PDF > Show Details > Enable encryption and add a password underneath.

2017-02-19
Rahul
Previous: Video of UFO Blowing Up The Space X Rocket
Next: Everyone has this plant but NOBODY knows that it makes cancer cells disintegrate within 48 hours