Why Natural Gas, Not Oil, May Fuel WW3

The source is Iran and Saudi Arabia, the cause is geo-political agreements between allies of these two countries, and the victim is Turkey, Syria and the Middle East – if left unchanged, the entire world. The conflict almost exclusively revolves around two natural gas pipelines which have the potential to supply the European Union with 23.3% of all its energy – worth more than 50 billion dollars annually to exporters. 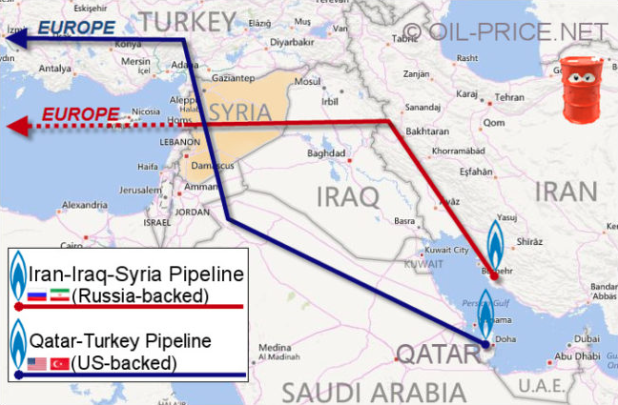 The main supplier of Europe’s gas comes from Russia. In recent times “Russia’s share of EU-28 imports of natural gas declined from 44.1 % to 29.5 % between 2003 and 2010, but this development was reversed with increases thereafter leading to a share of 39.0 % in 2013.”
Two new oil pipelines, yet to be completed, have the potential to deliver natural gas from sources in the Persian Gulf straight to Europe at a fraction of the cost we see today. Consequentially, the gas comes from a field located below the Persian Gulf, which also happens to be the largest natural gas deposit know in existence worldwide. Qatar is said to hold claim over 2/3 of the deposit, while Iran controls the remaining 1/3.
Now that you understand the significance, it is time to understand the partners involved. On one side there is Iran, Russia and China – which have mutual defense pacts. One the other side there is Qatar, Saudi Arabia and the United States. In addition to being a strong military partner to Saudi Arabia, the United States is also the leader of NATO.
The pipelines in question are known as the “Qatar-Turkey Pipeline” and the “Iran Pipeline”. The Qatar-Turkey lines runs from Qatar, to Saudi Arabia, to Jordan, to Turkey, to Syria and finally dumps in Europe. The Iran line runs from Iran, to Iraq, to Syria before going undersea and dumping in Greece. Notice these two competing lines share only one common connection, Syria. Quite simply, there you have it, the center for competing interests in the country and the reason two sides are funding/pushing the “Syrian Civil War.” 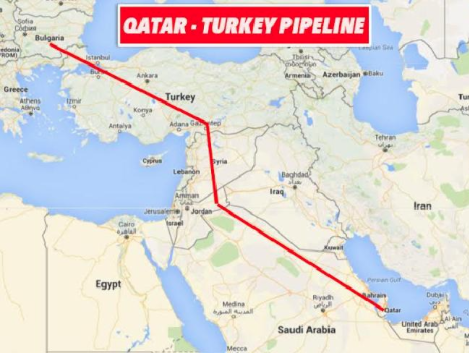 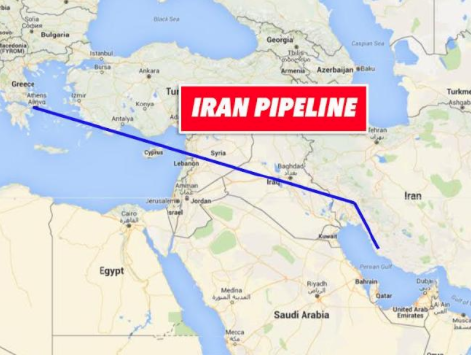 The Qatar pipeline, largely supported by Saudi Arabia was proposed in 2009. However, after the countries approached Bashar al-Assad and asked permission to run the final leg of the pipeline through his country, Assad refused in order “to protect the interests of [its] Russian ally, which is Europe’s top supplier of natural gas.”
A year later in 2010, Iran, with the full support of Russia and owning 1/3 the share of the same natural gas, announced plans for a new pipeline of their own. Unlike the Qatar pipeline, the Iran pipeline was supported by Assad, whom would allow it to run through his country. A year after this, in 2011, the Syrian Civil War broke out. Think that is a coincidence?
The Iran pipeline was due to be completed this year, in 2016, but because of the subsequent Civil War and rebel troop movement in the region, progress on the pipeline has come to a stand still. Not surprisingly, Saudi Arabia is said to be the primary funding source for these rebel troops – supplying them with $3 billion dollars between 2011 and 2013 alone. The United States, an ally of Saudi Arabia, has also been outspoken in their support for Syrian rebels. Russia on the other hand is in firm support of Assad and have moved their army into the country to defend his Presidency, ensure he looses no more territory, and protect Russia’s future interests in the region.
This is the conflict we now witness today known as the Syrian Civil War. Ironic it is called a civil war as at its core, it is funded by numerous outside countries – Iran, Russia, Saudi Arabia and the United States. Truth be told it is nothing but a proxy War, only different from Yemen in the fact that is centers around the flow of natural resources into Europe.
Russia/Iran continue to back Assad and Syrian nationalists while the United States/Saudi Arabia continues to back the rebels. Which side becomes victories will control the second largest source of energy for hundreds of millions of people throughout Europe – hundreds of billions, trillions, of dollars worth of revenue for decades to come.
It is a conflict with far greater reaching consequences than many people care the realize. Also happening in Poland and Romania, members of NATO, funded by the United States, are building themselves up to threaten Russia. With the American economy down and loaded with debt, Iran and China, partners with Russia, have lifted sanctions and re-written nearly every trade deal these countries have with one another – leveraged in their favors.
It can be seen in Yemen where Saudi Arabia and Iran are indirectly taking each other on in a proxy war, using the Yemenis people as pawns. It can be seen in the South China Sea where China continues to advance and militarize islands, much to the disapproval of US forces. It can be seen in the Baltic Sea where the United States continues to fly spy planes towards the Russian border and Russia retaliates with simulated fly by bombing of US air craft carriers. Every international incident around the world is directly tied to the internal conflicts between all of the countries mentioned above; a global Cold War.
Though the only actual “fighting” is taking place in Syria and Yemen, the defense pacts between nation states and their allies complicate geo-political strategy around the entire globe – directly leading to all the events we are now seeing across the globe.
An attack on Iran is an attack on Russia and China – vice versa . An attack on Saudi Arabia is an attack against the United States which is an attack against NATO – vice versa. This is why these global elites use pawns like Syria and Yemen and economic trade deals to “fight” each other indirectly rather than attack one other directly. It is a dangerous game of poker world leaders are now playing with one another, all the while hundreds of thousands of innocent people die around the world every year as a result – all because of societies dependence on fossil fuels and the revenue we can reap from this. It is truly the shame of our time…