It took a couple of tries to get the massive rock through the car window.

But the man kept hurling the stone at the black BMW amid a chorus of screams, gasps, “don’t-do-its” and “oh-my-gods” from the gathered crowd.

When he finally broke through, the car’s sole occupant — a weak, disoriented dog — scrambled into his arms.

And the crowd broke into applause.

A man in Grand Bend, Ontario, may have saved a life over the weekend, when he took things into his own hands to remove the dog from the sweltering car at a popular camping site.

The temperature on Saturday hovered around 86 degrees Fahrenheit.

While the Good Samaritan has not been identified, Will Costa, the man who took the video and posted it on Facebook, says he likely saved the dog’s life. 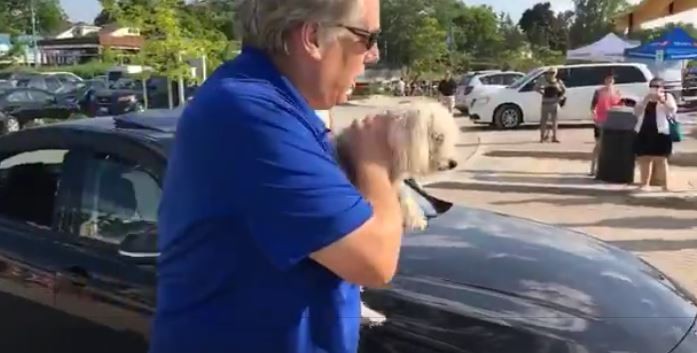 “There was a music festival happening and the announcer mentioned there was a dog in a hot car and for the owner to let the dog out,” Costa told The Dodo.”No one came after a while so everyone got together to solve the issue. After the dog was rescued, the owners showed up 50 minutes later.”

Police, he added, took custody of the dog.

You don’t always need a big rock to save a dog’s life. But we’re happy this man found what he needed to get this dog out. Leaving your pet in a parked car is never OK. Temperatures climb rapidly in close confines — 80 degrees outside, for example, can mean up to 99 degrees inside in just 10 minutes. And even if it’s only in the low 70s, the temperature can skyrocket to 116 degrees within an hour,according to the Humane Society of the United States.

2016-06-15
Rahul
Previous: Thirty Years In A Rusty Cage. Watch Her Reaction When She Is Freed!
Next: 1.5 Million Dust Mites Are Living in Your Bed! Remove Them by Doing Just This