Fukushima Radiation Makes Landfall On U.S. West Coast- And It is Only The Beginning

Independent researchers have detected seaborne cesium 134, a radioactive isotope released by the 2011 Fukushima disaster, on the U.S. Pacific coast.

After the catastrophic triple meltdown of the Fukushima Daiichi nuclear power plant in 2011, the Japanese worked together to cover up damages and the disaster’s many impacts, but to this day, 300 tons of contaminated, radioactive water flow into the Pacific every day, as the leaks cannot be sealed due to the extreme heat.

Nearly six years after the meltdown, radiation from Fukushima has made landfall on the United States Pacific coast.
Researchers from the Woods Hole Oceanographic Institution (WHOI) announced recently that seaborne cesium 134 was detected on the shores of Oregon’s Tillamook Bay. Though some researchers and corporate media outlets report the small amount detected poses “no risk to humans or the environment,” there is no such thing as a safe level of radioactive cesium.
We need only to look at how cancer rates have spiked in Japan and the dangers of bioaccumulation to know that those living on the West Coast or eating West Coast seafood are now at risk. 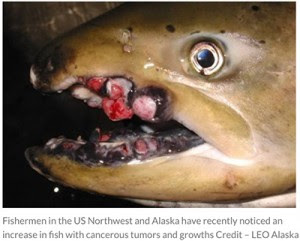 Children are especially at risk, especially as the sample just recently released was actually collected in January 2016, meaning cesium levels may now be significantly higher.
The world’s oceans are already in trouble; mass die-offs of fish and coral, combined with devastating over-fishing, recently led to a World Wildlife Fund warning that all marine life could die out before 2050 – barely thirty years from now.
A nuclear disaster leaking 300 tons of radioactive water into the ocean each day clearly isn’t helping things, either. We must acknowledge Fukushima’s consequences, for the dangers are very real.

2017-01-13
Rahul
Previous: The 3 Juice Colon Cleanse: How Apple, Ginger and Lemon Can Flush Pounds of Toxins From Your Body
Next: 24 ‘Alien’ 100 TONS Boxes Discovered Near Egypt’s Pyramids [Watch Video]

Horrible: Man Dragged Out of Home at Night, Tied to Tree and Burnt Alive