The World Health Organisation has confirmed that 36 Syrian children have dies as a  result of receiving tainted measles vaccines under a United Nations-sponsored program. 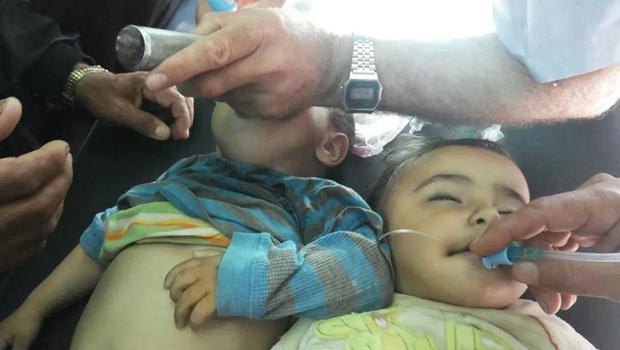 Children were given the vaccine in question specifically in the rebel-held north of Syria, and so far it does not appear to have effected children elsewhere.
Shortly after rumors began circling that the the vaccine was tainted as a deliberate sabotage, and the UN immediately stopped the vaccination program to limit the number of children affected.
In the towns of Jirjanaz and Maaret al-Nouman, in the province of Idlib, doctors said that there was no almost no time delay whatsoever between the children receiving the vaccine and them falling ill.

The death toll so far is 36, but there are said to be many more children who have fallen ill from this vaccine, these children however, are being treated and are said to be in a stable condition.

“It’s very bad. The figures of dead we are getting go into the 30s. Children are dying very quickly,” Daher Zidan, the coordinator of the relief organization and medical charity, Uossm, just over the border in Turkey says “We think it will get worse.”
The Syrian opposition coalition that controls the area of Idlib province said that “the Syrian interim government’s health ministry has instructed a halt to the second round of the measles vaccination campaign, which began Monday …following several fatalities and injuries among children in vaccination centers in the Idlib countryside,”
A tainted batch has been said to be the most likely reason for the tragedy according to the UN, although the real reason is not known yet.
“At least five children have died and 50 others are suffering from poisoning or allergic reactions after measles vaccinations in Jirjanaz, in Idlib province,” said the Syrian Observatory for Human Right.
The charity Save the Children has said that it was “appalled and deeply saddened” by the children’s’ deaths.
“Save the Children is appalled and deeply saddened by the news of the deaths of a number of children and the hospitalization of many more after receiving vaccinations for measles in northern Syria earlier today.
“The local authorities have launched an investigation. It is clear something has gone badly wrong and Save the Children will help the authorities in any way we can to help find out what has happened.”