They are a derogatory figure of speech and one of the Bible’s most important groups of people – but we might have got them entirely wrong. 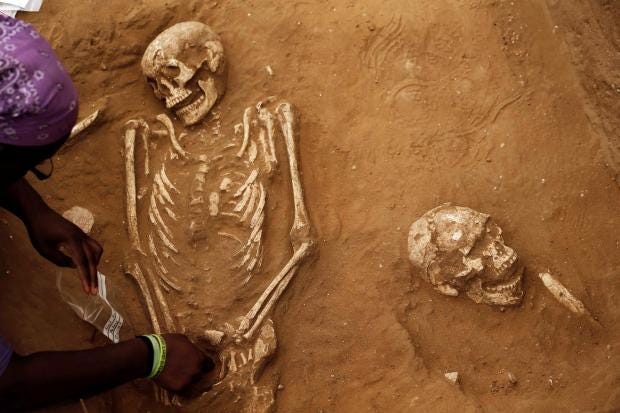 One of the Bible’s deepest and most important mysteries may be about to be solved.

Archaeologists appear to have found a cemetery belonging to the Philistines for the first time ever, along with the remains of 200 people who were buried there. And together they might help shed light on one the Bible’s most mysterious people.

The scientists have said that the members of the Biblical nation didn’t appear to be “philistines” – finding the people buried alongside jewellery and perfumed oil. They will now conduct further tests that could shed yet more light on the maligned people.

Those discoveries might be enough to make us rethink today’s use of the word philistine, which tends to refer to uncultured people who don’t know enough about the arts.

“The Philistines have had some bad press, and this will dispel a lot of myths,” said Lawrence Stager, an architect who has led the expedition that found the cemetery since 1985.

Until now, most of our understanding of the Philistines came from the things that they have left behind. But now for the first time we have found their remains.

“After decades of studying what Philistines left behind, we have finally come face to face with the people themselves,” said Daniel M. Master, professor of archaeology at Wheaton College and one of the leaders of the excavation. “With this discovery we are close to unlocking the secrets of their origins.”

In the Bible, the Philistines are depicted as the ancient Israelites’ archenemy, a foreign people who migrated from lands to the west and settled in five main cities in Philistia, in today’s southern Israel and the Gaza Strip.

The most famous Philistine was Goliath, the fearsome warrior who was slain by a young King David. The Philistines’ legacy lives on in the name Palestine, the term the Romans gave to the region in the 2nd century, and which is used today by Palestinians.

The discovery was finally unveiled Sunday at the close of a 30-year excavation by the Leon Levy Expedition, a team of archaeologists from Harvard University, Boston College, Wheaton College in Illinois and Troy University in Alabama. 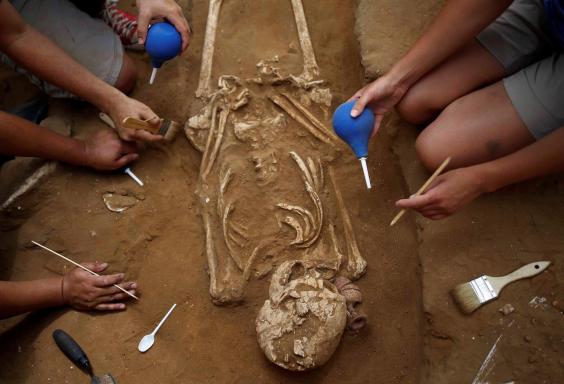 The archaeologists kept the discovery a secret for three years until the end of their dig because of a unique hazard of archaeology in modern-day Israel: they did not want to attract ultra-Orthodox Jewish protesters, Mr Master said.

“We had to bite our tongues for a long time,” he said.

In the past, the ultra-Orthodox have staged demonstrations at excavations where human remains are found, arguing that the remains could be Jewish and that disturbing them would violate a religious prohibition.

Mr Stager’s team dug down about 3 metres (10 feet) to uncover the cemetery, which they found to have been used centuries later as a Roman vineyard.

On hands and knees, workers brushed away layers of dusty earth to reveal the brittle white bones of entire Philistine skeletons reposed as they were three millennia ago.

Decorated juglets believed to have contained perfumed oil were found in graves. Some bodies were still wearing bracelets and earrings. Others had weapons.

The archeologists also discovered some cremations, which the team say were rare and expensive for the period, and some larger jugs contained the bones of infants.

“The cosmopolitan life here is so much more elegant and worldly and connected with other parts of the eastern Mediterranean,” Stager said, adding that this was in contrast to the more modest village lifestyle of the Israelites who lived in the hills to the east.

Archaeologists and biblical scholars have long believed the Philistines came from the Aegean region, based on pottery found in excavations of Philistine sites.

But scholars have debated where exactly in the Aegean region the Philistines came from: mainland Greece, the islands of Crete or Cyprus, or even Anatolia, in modern-day Turkey.

The bones might hold the answers, said archaeologist Yossi Garfinkel, an Israeli expert on the period who did not participate in the dig. He called the cemetery find “a very significant discovery indeed.”

The excavation of the cemetery has also shed light on Philistine burial practices.

The Philistines buried their dead with perfume bottles, placed near the face. Near the legs were jars that likely held oil, wine or food. In some cases, archaeologists found the dead were buried wearing necklaces, bracelets, earrings, and even toe rings. Some were buried with their weapons.

“This is how Philistines treated their dead, and it’s the code book to decoding everything,” said archaeologist Adam Aja, a participant in the dig.

Finds from the cemetery went on display in an Israel Museum exhibition held at the Rockefeller Archaeological Museum in Jerusalem.

2016-10-12
Rahul
Previous: Flu Vaccine Contains 25,000 Times More Mercury Than is Legally Allowed in Drinking Water
Next: Humans Have A ‘Magnetic 6th Sense’ To Detect Something We Can’t Even See!