A law student seeking accommodation in Paris was left in shock after receiving creepy messages from a landlord offering her a free room in return for licking his feet.

Erin Clark, from Edinburgh, appealed on social media for accommodation in the French capital and was told by ‘Franciso’ she could have a room for free if she followed his ‘conditions’.

He then sent images of his chastity belt and promised her she could have the key. Erin, 19, in a masterpiece of understatement, said the offer would be filed in her pile marked ‘course starts in two days and I’m homeless’.

She shared the bizarre exchange online and her post has attracted over 23,000 likes and 4,300 retweets.

Erin, who is studying at Edinburgh University, is moving as part of her course to the Paris Institute of Political Studies.

Her studies in Paris start on August 22 and she has been, with an increasing sense of urgency, posting on various Parisian accommodation pages.

The conversation with Francisco began promisingly, with the Frenchman asking: ‘Hi, are you still looking for a room?’ Delighted she may have found somewhere, Erin replied: ‘I am! Are you looking or offering?’

After confirming he had a bunk for the Scottish student, Erin asked for more information. 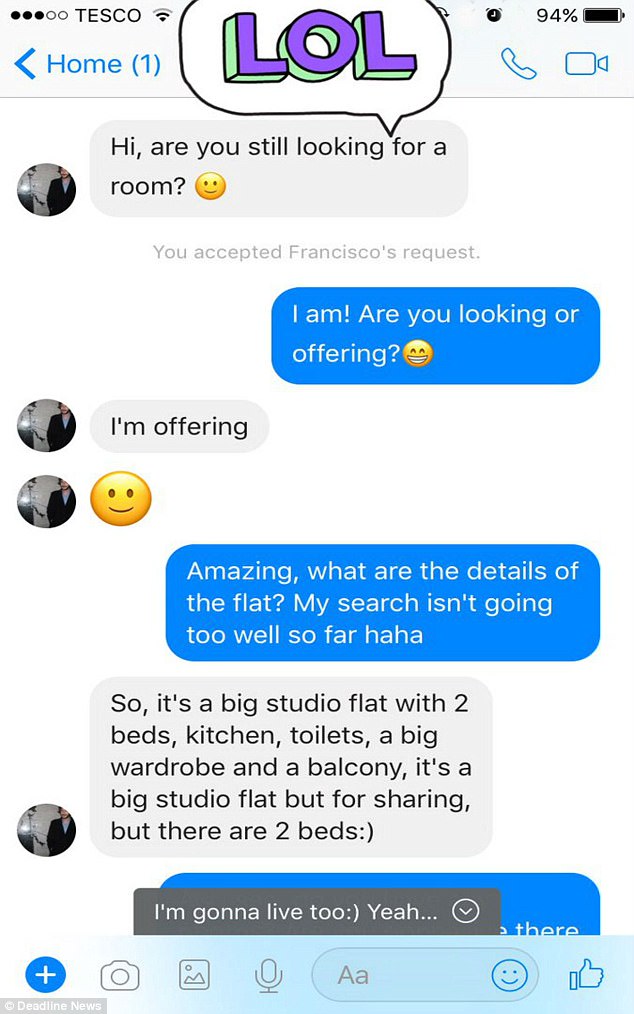 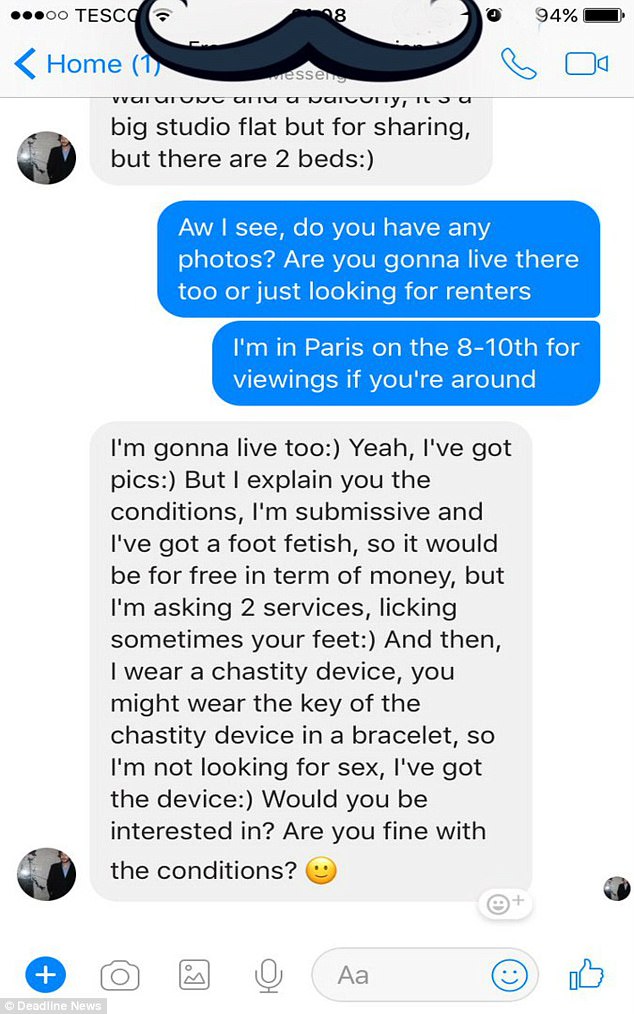 The conversation with Francisco began promisingly, with the Frenchman asking: ‘Hi, are you still looking for a room?’ But things took a turn for the worse when he shared his bizarre ‘conditions’ for living there
——-

Writing back with the basic details of the flat, Francisco explained the accommodation setup in more detail. However, things began to take a creepy turn when Francisco replied: ‘I’m gonna live there too. But I explain you conditions, I’m submissive and I’ve got a foot fetish, so it would be free in term of money, but I’m asking for two services, licking your feet sometimes.

‘And then, I wear a chastity device, you might wear the key of the chastity in a bracelet, so I’m not looking for sex, I’ve got the device. ‘Would you be interested? Are you fine with the conditions?’ 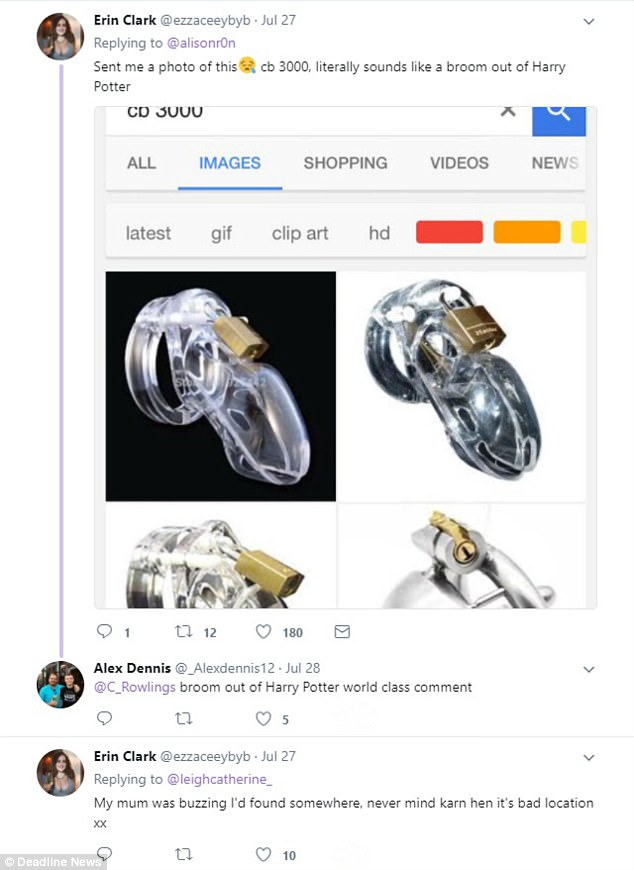 He then wrote a bizarre message explaining: ‘I wear a chastity device, you might wear the key of the chastity in a bracelet, so I’m not looking for sex, I’ve got the device. ‘Would you be interested? Are you fine with the conditions?’
———–

Posting online she wrote: ‘Flat hunting in Paris is going really well thanks for asking!’

Erin later wrote under the tweet: ‘I’ve placed him in the “my course starts in two days and I’m homeless” pile. I’ve lost my flat keys 4 times since September alone Francisco son, it is not me you are wanting.’

Erin said: ‘I thought it was like so convenient and almost too perfect when he was offering a room. I told my mum I’d finally found somewhere and then received the foot message and had to tell her it was like a bad area and not suitable.’

Commenting on the post, social media users have suggested not ruling out the ‘free’ room.

@KimmiMcMillan wrote: ‘All I’m reading is that you’re being offered a free flat in paris’ @Jake-laughton said: ‘Fair deal that. Bet it’s expensive in the capital, sea daft to turn that down. And gets a free foot tongue scrub.’

@bhoybutler3376 tweeted: ‘Free accommodation in Paris to let someone lick yr feet and wear a key, shouldn’t be so choosy’. 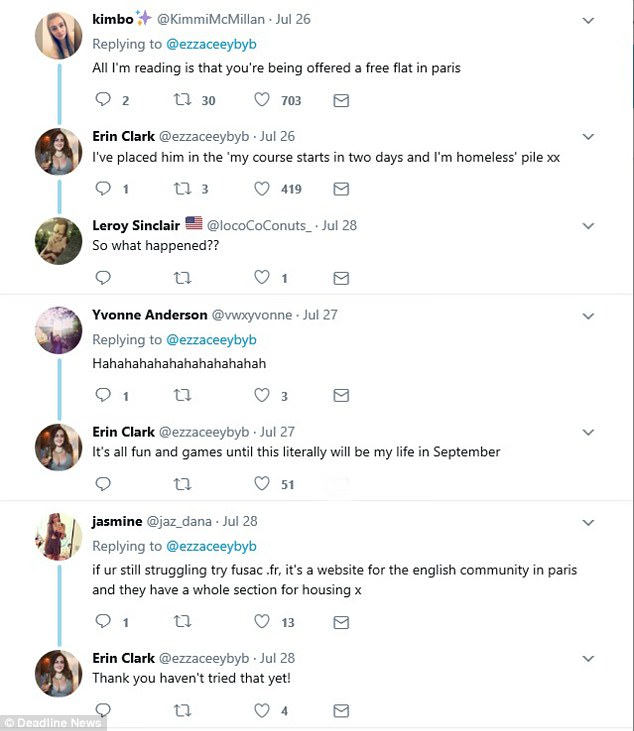 2017-08-03
Rahul
Previous: In Other News, This Baby Boy In Maharashtra Was Born ‘Pregnant’ With His Own Twin
Next: Dad Who Set Daughter On Fire Because She Was ‘Too Beautiful’ Is Jailed