Given that cannabis has massive cancer curing potential, the re-entrance of marijuana into the main stream consciousness has come on leaps and bounds in recent years. 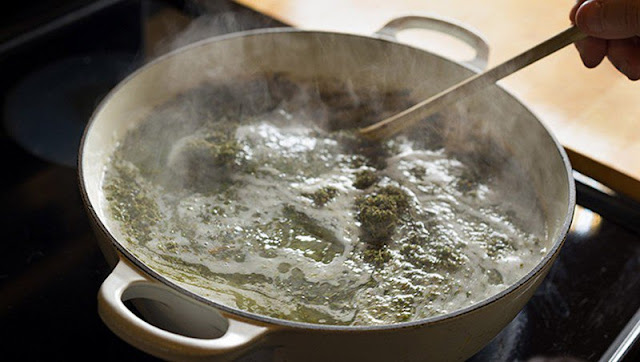 It’s the cannabinoids in the plant that enter the human body on consumption that provide the medicinal effects. The cannabinoids bind with receptors that are already situated in our brains –   our bodies are literally made to handle this stuff.
The resulting endocannabinoids that are released by the human body perform a variety of positive effects, including cell growth regulation.  The fact that there are receptors for the chemical in our brains seems to indicate that we evolved to eat the plant and bathe in the positive impact the chemicals have on our system.
Probably the he most popular ways to consume the plant is to smoke it although the excess chemicals from the combustion can cause unnecessary damage to the lungs and the body.
Enter Rick Simpson – a pioneer of medical cannabis. He has perfected the art of cannabis oil production and given his techniques to the world for free.

Here’s is a condensed version of Rick’s hemp oil process:

We start with one ounce of dried herb. This will typically produce 3-4 grams of oil, although the amount of oil produced per ounce will vary strain to strain.

A pound of dried material will yield about two ounces of high quality oil.
IMPORTANT: These instructions are directly summarized from Rick Simpson’s website. Be VERY careful when boiling solvent off, the fumes are extremely flammable. AVOID smoking, sparks, stove-tops and red hot heating elements. Set up a fan to blow fumes away from the pot, and set up in a well-ventilated area for whole process.

1. Place the completely dry material in a plastic bucket.

2. Dampen the material with the solvent you are using. Many solvents can be used. You can use pure naphtha, ether, butane, or 99% isopropyl alcohol. Two gallons of solvent is required to extract the THC from one pound, and 500 ml is enough for an ounce.

3. Crush the plant material using a stick of clean, untreated wood or any other similar device. Although the material will be damp, it will still be relatively easy to crush up because it is so dry.

4. Continue to crush the material with the stick, while adding solvent until the plant material is completely covered and soaked. Remain stirring the mixture for about three minutes. As you do this, the THC is dissolved off the material into the solvent.

5. Pour the solvent oil mixture off the plant material into another bucket. At this point you have stripped the material of about 80% of its THC.

6. Second wash: again add solvent to the mixture and work for another three minutes to extract the remaining THC.

7. Pour this solvent oil mix into the bucket containing the first mix that was previously poured out.

9. Pour the solvent oil mixture through a coffee filter into a clean container.

10. Boil the solvent off: a rice cooker will boil the solvent off nicely, and will hold over a half gallon of solvent mixture. CAUTION: avoid stove-tops, red hot elements, sparks, cigarettes and open flames as the fumes are extremely flammable.

11. Add solvent to rice cooker until it is about ¾ full and turn on HIGH heat. Make sure you are in a well-ventilated area and set up a fan to carry the solvent fumes away. Continue to add mixture to cooker as solvent evaporates until you have added it all to the cooker.

12. As the level in the rice cooker decreases for the last time, add a few drops of water (about 10 drops of water for a pound of dry material). This will help to release the solvent residue, and protect the oil from too much heat.

13. When there is about one inch of solvent-water mixture in the rice cooker, put on your oven mitts and pick the unit up and swirl the contents until the solvent has finished boiling off.

14. When the solvent has been boiled off, turn the cooker to LOW heat. At no point should the oil ever reach over 290 degrees F or 140 degrees C.

15. Keep your oven mitts on and remove the pot containing the oil from the rice cooker. Gently pour the oil into a stainless steel container

16. Place the stainless steel container in a dehydrator, or put it on a gentle heating device such as a coffee warmer. It may take a few hours but the water and volatile terpenes will be evaporated from the oil. When there is no longer any surface activity on the oil, it is ready for use.

17. Suck the oil up in a plastic syringe, or in any other container you see fit. A syringe will make the oil easy to dispense. When the oil cools completely it will have the consistency of thick grease.

2016-09-11
Rahul
Previous: Undercover Researcher Infiltrates the Deep Web. This is What She Finds
Next: Putin Involved In Massive Assassination Attempt As Car Crashes

A Herb That Kills Cancer Cells in 48 Hours

There’s an Undiscovered Organ in Your Body, And It Could Explain How Cancer Spreads