The U.S. Government failed to deter them through threats of criminal prosecution, and clumsy attempts to intimidate their families. Now four former Air Force drone operators-turned-whistleblowers have had their credit cards and bank accounts frozen, according to human rights attorney Jesselyn Radack.

“My drone operators went public this week and now their credit cards and bank accounts are frozen,” Radack lamented on her Twitter feed (the spelling of her post has been conventionalized). This was done despite the fact that none of them has been charged with a criminal offense – but this is a trivial formality in the increasingly Sovietesque American National Security State. 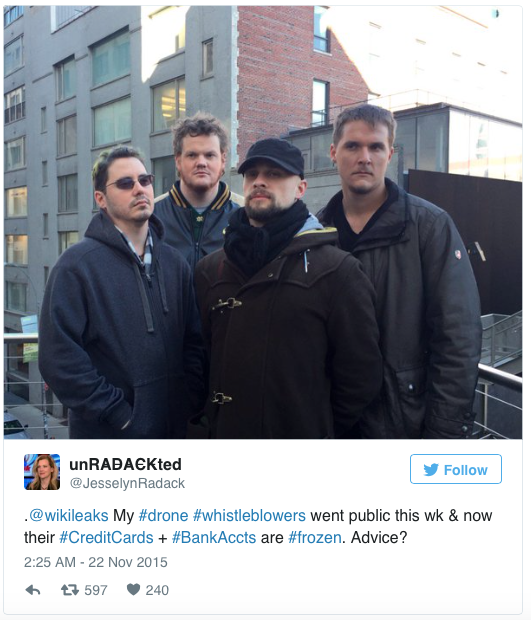 Michael Haas, Brandon Bryant, Cian Westmoreland and Stephen Lewis, who served as drone operators in the US Air Force, have gone public with detailed accounts of the widespread corruption and institutionalized indifference to civilian casualties that characterize the program. Some of those disclosures were made in the recent documentary Drone; additional details have been provided in an open letter from the whistleblowers to President Obama, Defense Secretary Ashton Carter, and CIA Director John Brennan.

“We are former Air Force service members,” the letter begins. We joined the Air Force to protect American lives and to protect our Constitution. We came to the realization that the innocent civilians we were killing only fueled the feelings of hatred that ignited terrorism and groups like ISIS, while also serving as a fundamental recruiting tool similar to Guantanamo Bay. This administration and its predecessors have built a drone program that is one of the most devastating driving forces for terrorism and destabilization around the world.”
Elsewhere the former drone operators have described how their colleagues dismissed children as “fun-sized terrorists” and compared killing them to “cutting the grass before it grows too long.” Children who live in countries targeted by the drone program are in a state of constant terror, according to Westmoreland: “There are 15-year-olds growing up who have not lived a day without drones overhead, but you also have expats who are watching what’s going on in their home countries and seeing regularly the violations that are happening there, and that is something that could radicalize them.”
By reliable estimates, ninety percent of those killed in drone strikes are entirely harmless people, making the program a singularly effective method of producing anti-American terrorism. “We kill four and create ten,” Bryant said during a November 19 press conference, referring to potential terrorists. “If you kill someone’s father, uncle or brother who had nothing to do with anything, their families are going to want revenge.”
Haas explained that the institutional culture of the drone program emphasized and encouraged the dehumanization of the targeted populations. “There was a much more detached outlook about who these people were we were monitoring,” he recalled. “Shooting was something to be lauded and something we should strive for.”
Unable to repress his conscience or choke down his moral disgust, Haas took refuge in alcohol and drug abuse, which he says is predictably commonplace among drone operators. At least a half-dozen members of his unit were using bath salts and could be found “impaired” while on duty, Haas testifies.
Among the burdens Bryant now bears is the knowledge that he participated in the mission that killed a fellow U.S. citizen, Anwar al-Awlaki. Identified as a radical cleric and accused of offering material support for al-Qaeda, al-Awlaki was executed by a drone strike in Yemen. His 16-year-old son, Abdulrahman, was killed in a separate drone strike a few weeks later while sitting down to dinner at the home of a family friend. Asked about the killing of a native-born U.S. citizen – who, at age 16, was legally still a child – former White House press secretary Robert Gibbs appeared to justify that act by blaming it on the irresponsibility of the innocent child’s father.
As Bryant points out, as a matter of law the elder al-Awlaki was innocent, as well.
“We were told that al-Awlaki deserved to die, he deserved to be killed as a traitor, but article 3 of section 2 of the U.S. Constitution states that even a traitor deserves a fair trial in front of a jury of his peers,” Bryant notes, lamenting that his role in the “targeted killing” of a U.S. citizen without a trial was a violation of his constitutional oath.
Investigative reporter Jeremy Scahill has produced evidence suggesting that the White House-approved killing of Anwar al-Awlaki’s son may have been carried out as retaliation against the family for refusing to cooperate in the search for the cleric. There are indications that the government has tried to intimidate the whistleblowers by intimidating their families.
In October, while Brandon Bryant was preparing to testify about the drone program before a German parliamentary committee, his mother LanAnn received a visit in her Missoula, Montana home from two representatives of the Air Force’s Office of Special Investigations. The men claimed that her personal information was in the hands of the Islamic State, which had placed her name on a “hit list.” She was also told not to share that disclosure with anyone – a directive she promptly ignored by informing Ms. Radack, who represents Brandon and the other whistleblowers.
According to Radack, a very similar episode occurred last March in which the stepparent of another whistleblower received a nearly identical visit from agents of the Air Force OSI. “This is the US government wasting taxpayer dollars trying to silence, intimidate and shut up people. It’s a very amateurish way to shut up a whistleblower … by intimidating and scaring their parents. This would be laughable if it weren’t so frightening.”
Given the role played by the U.S. government in fomenting, equipping, and abetting the growth of ISIS, such warnings have to be perceived as credible, albeit, indirect death threats.

Horrible: Man Dragged Out of Home at Night, Tied to Tree and Burnt Alive

Daily Breathing in This City is Equivalent to Smoking 44 Cigarettes