There are many reasons why children under the age of 12 shouldn’t be using brightly lit handheld devices. 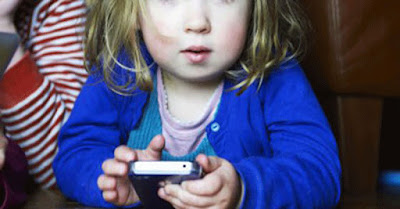 The world is constantly changing with technology developing at a tremendous rate. Evolving new technology has been enhanced our lives for many years, but do you know what these handheld devices are doing to your children?
Children should have restricted access to handheld devices such as cellphones, tablets, etc. to avoid developmental consequences.
Research indicates that technology is harming our children, yet many adults continue to support unrestricted use. These devices have increased infant, toddler, and child access and immersion into a viral world devoid of critical factors for development, behavior, and learning.

1. Rapid brain growth:
When a child is between 0-2 years, the brain triples in size and continues in a state of rapid development to 21 years of age. Early brain development is determined by environmental stimuli or lack thereof. Stimulation for a developing brain caused by overexposure to technologies has shown to be associated with executive functioning and attention deficit, cognitive delays, impaired learning, increased impulsivity and decreased ability to self-regulate.
2. Delayed development:
The technology we have come to know restricts movement for children, which can result in delayed development. 1 in 3 children enters school with being developmentally delayed, negatively impacting literacy and academic achievement. Movement enhances attention and learning abilities. When technology is used under the age of 12 it is detrimental to a child’s development and learning.
3. Epidemic obesity:
Children who are allowed to have devices in their rooms have 30 percent increased risk of obesity. 1 in 4 Canadian children and 1 in 3 U.S. children are obese. 30 percent of children who are obese will develop diabetes, and obese individuals have a high risk of early stroke and heart attack, which shortens life expectancy. 21st century children may be the first generation to not outlive their parents.
4. Sleep deprivation:
60 percent of parents don’t watch their children’s technology usage, and 75 percent of children are allowed to use technology in their bedrooms. Those 75 percent of children aged 9-10 are sleep deprived to the extent that their grades are impacted.
5. Mental illness:
When technology is overused it is implicated as a causal factor in rising rates of child depression, anxiety, attachment disorder, attention deficit, autism, bipolar disorder, psychosis, and problematic child behavior. 1 in 6 Canadian children has diagnosed mental illnesses.
6. Aggression:
Violent media can cause child aggression. When young children are exposed to incidences of physical and sexual violence like “grand theft auto V” it portrays sex, murder, rape, torture, and mutilation, as do many TV shows. The U.S. categorized media violence as a Public Health Risk due to casual impact on child aggression. The media reports increased use of restraints and seclusion rooms with children who exhibit uncontrolled aggression.
7. Digital dementia:
When high-speed media content can contribute to attention deficit, as well as decreased concentration and memory, due to the brain pruning neuronal tracks to the frontal cortex. Children who can’t pay attention, can’t learn.
8. Addictions:
When parents add more technology, they’re detaching from their children. When parental attachment is absent, detached children can attach to devices, which can result in addiction. 1 in 11 children aged 8-18 are addicted to technology.
9. Radiation emission: May of 2011, the WHO classified cell phones as a category 2B risk (possible carcinogen) because of radiation emission. In 2013, Dr. Anthony Miller from the University of Toronto’s School of Public Health recommended that based on research, radio frequency exposure should be reclassified as 2A (probably carcinogen), not 2B.
10. Unsustainable: The way children are raised and educated in a technological world is no longer sustainable. What has the potential to teach practical life skills rather has become a viral sinkhole of aforementioned hazards. The future is bleak for children who overuse technology.
11. Eye strain: It is more common for children to suffer from eye strain after staring at screens for hours. This can also be called computer vision syndrome. You can avoid children with eye problems by limiting screen time to 30 minutes at a time.

2016-08-16
Rahul
Previous: This Is What Your Poop Says About Your Health
Next: The Hazards Over Our Heads: Energy-Saving Bulbs are Poisonous to the Brain, Nervous System and Eyes