Most Women Miss These 3 Early Signs of Cervical Cancer

As scary as it sounds, women with early cervical cancers and pre-cancers usually don’t experience any symptoms, until a pre-cancer becomes a true invasive cancer. Symptoms finally begin to appear when the cancer grows into a nearby tissue and becomes even more serious. Routine Pap screenings are extremely important in finding and treating cervical cancer, and other reproductive cancers like ovarian cancer, as early as possible. The Pap test locates abnormal cells in the cervix which are then monitored and treated if necessary.

In between Pap screenings, it’s important to know and look out for these early signs of cervical cancer.

The most common symptom of cervical cancer is irregular vaginal bleeding, which many women tend to shrug off. Irregular bleeding could occur in between menstrual periods or after sex. It may be disguised as spotting, showing as a slight blood-streaked discharge. Menstrual bleeding may also become heavier and last longer than usual. A major warning sign of cervical cancer or other problems is vaginal bleeding in post-menopausal women who no longer have periods.

There are several types of vaginal discharge that can be an early sign of cervical cancer. A continuous discharge with any of the following characteristics may be a warning sign:

Experiencing pain during intercourse or at other times may be a warning sign for cervical cancer. It could signal abnormal changes to the cervix. Cervical cancer can spread within the pelvis. 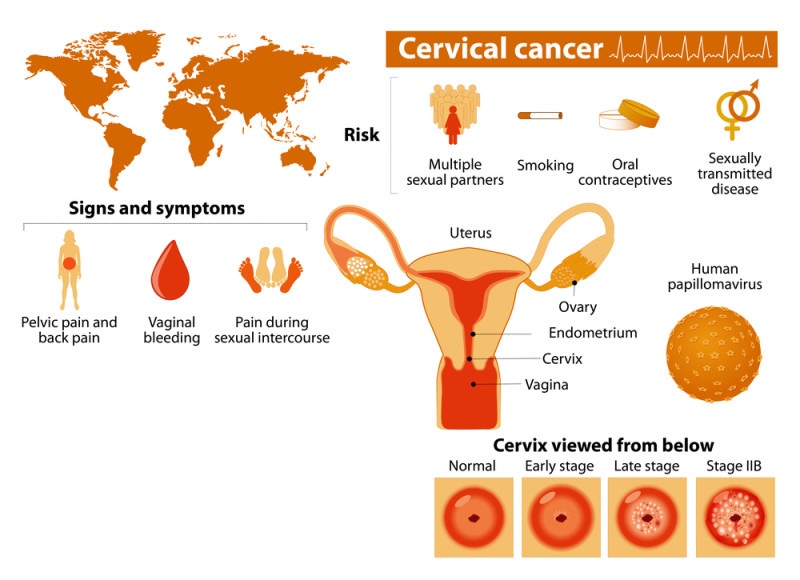 The above signs of cervical cancer are often missed, as many women don’t know to look for them. If you experience any of the following symptoms, it may be a sign of advanced cervical cancer:

What Puts You at Risk?

Knowing and watching out for the early warning signs of cervical cancer is step 1 to catching it before it can spread and become more dangerous. The following are factors that can put you at a higher risk for developing the disease:

The American Cancer Society cautions that the above signs and symptoms can be caused by conditions other than cervical cancer, such as an infection that leads to pain or bleeding. But if you are experiencing any of these problems, make an appointment with your health care professional right away. Even if it is an infection, it will still need to be treated. When something isn’t right, your body has certain ways of telling you that there’s a problem, so don’t ignore something that’s out of the ordinary. Getting regular Pap tests will help to catch cancerous cells early, before they have a chance to spread.

Watch the video below for more information on the early signs of cervical cancer:

2016-11-03
Rahul
Previous: A Natural Sleep Remedy That Will Put You to Sleep Fast
Next: Contaminated Food From China Entering The U.S. Under The ‘Organic’ Label