Why Does The West Hate Putin? Here Is The Secret Reason

The Official Reasons
We all know the governments of the West, lead by the US and the UK, have turned against Russia. There are many reasons offered by our media: Russia tried to stop the Ukraine from joining the EU. Russia helped the “pro-Russian rebels” shoot down MH-17. Russia “invaded” the Crimea illegally. Thousands of Russian troops and tanks are fighting in the Ukraine. Some of us think these claims are war propaganda for the citizens of the West used to justify sanctions against Russia and increasing military tensions.

The Geo-political Reasons
Less widely discussed but much more important are the geo-political reasons which look at the areas of conflict between the economic interests of the US and those of Russia and China. At the moment the EU is heavily dependent on eenergy from Russia. The US would like to stop this. The conflict in the Ukraine is an important part of the process of economically separating the EU from Russia. But there is also a wider agenda. China and Russia lead the BRICS group of countries consisting of Brazil, Russia, India, China and South Africa. The BRICS countries want to develop a world wide economic system that does not depend the US dollar. They want to be independent of the International Modetary Fund (IMF) and the World bank. China has also suggested to Europe that they join together with Russia and themselves in what they call the New Silk Road, stretching across the whole of Eurasia, from Lisbon to Shanghai. Needless to say there is no immediate place for the US in this plan, so this gives another reason to cut the economic ties between Russia and the EU.

The Secret Reason – The War that Didn’t Happen
While these factors are all important, there is another factor which is never discussed in the Western media. The trigger for the sudden hostility against Russia and Putin can be found in almost unreported events which took place late in August and early September 2013. What happen in that crucial period is that a planned NATO surprise attack on Syria was stopped by Russia. This was probably the first time since WWII that a military attack planned by the West was confronted by sufficient force to require its cancellation. The people in the West will not be told because their belligerent, tough-talking leaders “blinked”. They backed down and decided to change their plans. The new plan: Undermine the Ukraine and seize Crimea for NATO. This obviously didn’t work either, and the mess they created is still with us.

The Planned US/French Attack on Syria
Early in the morning of Saturday, August 31, 2013, an American official called the office of President Hollande telling him to expect a call from Obama later in the day. “Assuming that the evening phone call would announce the commencement of U.S. air strikes (against Syria), Hollande ordered his officers to quickly finalize their own attack plans. Rafale fighters were loaded with Scalp cruise missiles, their pilots told to launch the 250-mile-range munitions while over the Mediterranean.” In other words, at this point in time the French pilots and the US forces were only waiting for the final command from President Obama to begin their attack. However, later that same day, at 6:15 pm, Obama called the French President to tell him that the strike scheduled for 3:00 am, September 1, would not take place as planned. He would need to consult Congress.

Three days later, at 06:16 GMT Tuesday, September 3, two missiles were launched “from the central part of the Mediterranean Sea” heading for the Syrian coast, but they did not reach Syria. “Both missiles crashed into the sea.” There are several different accounts of what took place. According to Israel Shamir:

“It was claimed by a Lebanese newspaper quoting diplomatic sources that the missiles were launched from a NATO air base in Spain and they were shot down by the Russian ship-based sea-to-air defence system. Another explanation proposed by the Asia Times says the Russians employed their cheap and powerful GPS jammers to render the expensive Tomahawks helpless, by disorienting them and causing them to fail. Yet another version attributed the launch to the Israelis, whether they were trying to jump-start the shoot-out or just observed the clouds, as they claim.”

The Warships Were Ready
It is hard to know what was behind this failed missile launch, but it did not trigger an all-out war. We can all be very thankful for this. In the map below we can see the significant collection of warships in position off the Syrian coast at the time. An article in Global Research referred to a “massive US and allied naval deployment is occurring in the Eastern Mediterranean off Syria’s coastline as well as in the Red Sea and the Persian Gulf.” 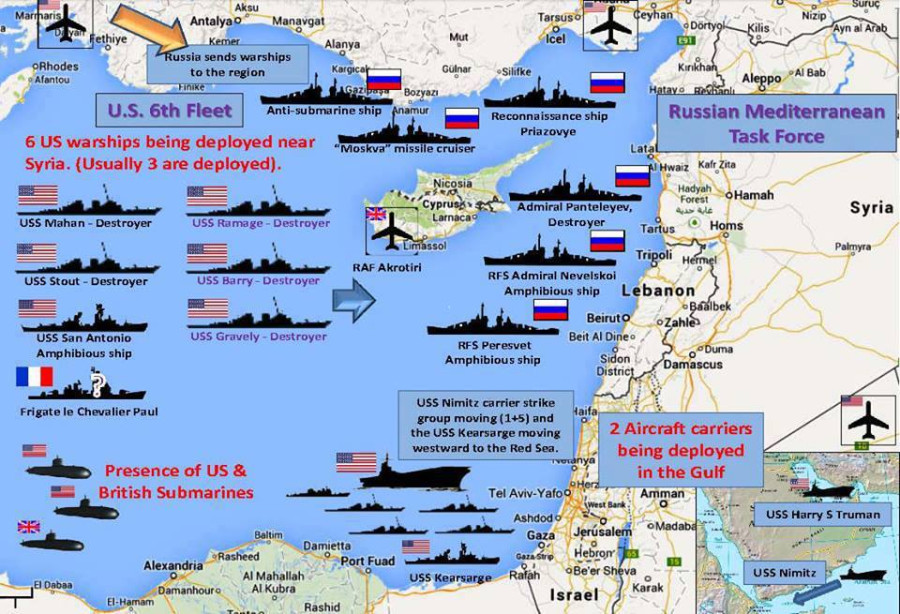 At the time it looked almost certain that the US and its allies would launch an attack on Syria. Instead the proposed attack was put off indefinitely. As Israel Shamir says, “the steely wills of America and Eurasia had crossed in the Eastern Mediterranean,” and the US suddenly decided to back away from such a serious military conflict. One commentator quipped that Obama finally deserved his Nobel Peace Prize after all. Here is the assessment of the situation from the Saker, an outspoken opponent of what he calls the Anglo-Zionist Empire. Because of his previous life the Saker has insider knowledge of the workings of NATO military affairs.

“Less noticed was the fact that Russia sent a hastily assembled but capable naval task force to the Syrian coast. Not a task force big enough to fight the US Navy, but a task force capable of providing a full view of the skies over and beyond Syria to the Syrian military. In other words, for the first time the US could not achieve a surprise attack on Syria, not with cruise missiles, not with airpower. Worse, Russia, Iran and Hezbollah embarked on a covert and overt program of material and technical assistance for Syria which ended up defeating the Wahabi insurgency.”

Why Did the US Change Plans?
It is difficult for us to know all of the manoeuvres which took place behind the scenes during August and September, 2013, but the final outcome is clear. After years of increasing tensions and threats, the US and its allies decided not to launch a direct attack on Syria as planned. Given the rhetoric and military deployment directed against Syria seemed to follow the script used for Iraq and Libya, there has been little discussion in the West about why the US and its friends suddenly changed their plans. Now with hindsight we can see that this failed direct attack led to an increased indirect attact and the rise of what is know known as ISIS.

Two of the obvious reasons I can see for this sudden change are not the sort of things the political leaders of the West want to discuss. One is the fact that these wars are very unpopular. As a result of countless lies and failures revealed about the pointless and savage wars in Afghanistan, Iraq and Libya, it seems that some of the politicians are listening to their citizens. How else can you explain the unexpected decision of the British Parliament on Thursday, 29 August, to vote against the UK taking part in any strikes on Syria?

The other reason is the extent of the military build-up by Syria, Russia and even China. The Russians and Chinese have not only blocked the US in the Security Council. They “voted” with their military hardware. They are not happy about what the US planned for Syria and made it quite clear that they would use force to stop them. When was the last time the Chinese ever sent warships to the Mediterranean? Both Russia and China are clearly not happy with the way the US decides to invade one country after another.

What Does it Mean?
For reasons which are not hard to imagine, there has been little discussion of the broader significance of these events in the Western media. However commentators like Israel Shamir and Pepe Escobar believe these events signal an important shift in the balance of power in the world. The following is taken from a presentation by Israel Shamir at the Rhodes Forum October 5, 2013:

“First, the good news. American hegemony is over. The bully has been subdued.
“We cleared the Cape of Good Hope, symbolically speaking, in September 2013. With the Syrian crisis, the world has passed a key forking of modern history. It was touch and go, just as risky as the Cuban missile crisis of 1962.
“The chances for total war were high, as the steely wills of America and Eurasia had crossed in the Eastern Mediterranean. It will take some time until the realisation of what we’ve gone through seeps in: it is normal for events of such magnitude.”

For ‘Eurasia’ read Russia and China. In blunt terms, these two countries simply forced the US to back off and cancel their plans for war. Generally speaking, the ordinary people of the US, the UK and many other countries were just as opposed to the attack as the people in Syria itself.

Pepe Escobar is even more dramatic. Writing on the 17th October, after the Syrian backdown and the government shutdown in Washington, he explains that there has been a policy shift in Bejing. Now, for China, the diplomatic gloves are off. It’s time to build a “de-Americanized” world. It’s time for a new international reserve currency to replace the US dollar. This new approach is presented in a Xinhua editorial. The last straw for them was the US shutdown coming on top of the financial crisis provoked by Wall Street banks. He quotes perhaps the most important paragraph:

“Instead of honoring its duties as a responsible leading power, a self-serving Washington has abused its superpower status and introduced even more chaos into the world by shifting financial risks overseas, instigating regional tensions amid territorial disputes, and fighting unwarranted wars under the cover of outright lies.”

China has at least three parts to this new strategy. The first is to stop the military adventures of the US. All nations must respect international law and deal with conflicts within the framework of the UN. The second is to broaden membership of the World Bank and International Monetary Fund to include countries in the emerging and developing world. The third is to work towards a “new international reserve currency that is to be created to replace the dominant US dollar.”

Perhaps this is why the leaders in the West are not celebrating the war that didn’t happen. The Russians and Chinese have forced the West to adhere to international law and avoid an illegal war. Further, the Chinese see this as a beginning of a new era in world politics. They want to “de-Americanize” the world. The Russians want to see a “multi-polar” world. This means that the US and its small group of friends in Western Europe and Japan will need to recognize that they cannot make all the major decisions in the world on their own.

2017-05-05
Rahul
Previous: Oldest Human Aged 146, Dies In Indonesia
Next: The Oil That Treats Chickenpox, Psoriasis, Cold Sores And Much More