In an arrest that will shock no one, Australia’s highest ranking Vatican official – and the third most highly ranked official of the Catholic Church in the world – has recently been arrested on pedophilia charges.

Cardinal George Pell is not only a high-ranking official in the church, he’s also the Vatican’s treasurer, meaning he’s responsible for the ledgers of vast sums of money.
Unsurprisingly, Cardinal Pell claims he’s innocent, but the charges bring yet another bruise to the Catholic church’s already damaged luster.
The arrest comes amidst growing criticism of Pope Francis’s softened stance toward pedophilia, as sanctions against pedophilia-committing priests have recently been lessened.
According to CNN, Pell claims he’s a victim of “relentless character assassination.”
“I’m innocent of these charges, they are false,” Pell said. “The whole idea of sexual abuse is abhorrent to me.”
Despite Pell’s position of power, Australian officials say he is being treated similarly to how anyone else arrested on such charges would be treated.

“I want to be perfectly clear — the process and the procedures that have been followed in the charging of Cardinal Pell have been the same that have been applied in a whole range of historical sex offenses whenever we investigate them,” Victoria Deputy Police Commissioner Shane Patton said at a news conference. 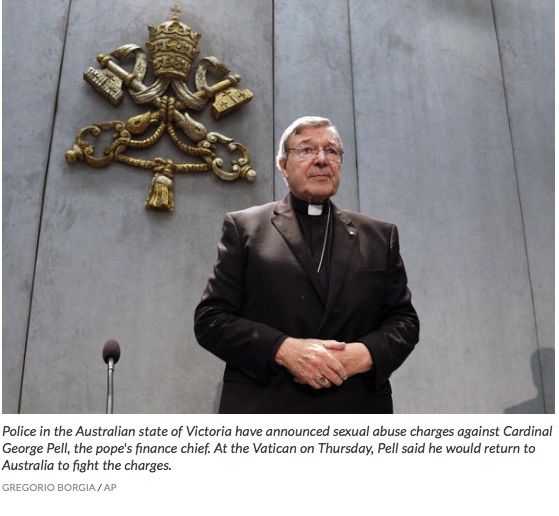 That these charges come just as Pope Francis has absolved over 2,000 pedophilia priests, stating that no charges need to be filed against them, and no arrests should be made, shows just how far the Catholic Church has yet to go.

2017-07-08
Rahul
Previous: Revelation: Judeo-Christian Bible Twice as Violent as Islamic Quran
Next: People With Anxiety Disorders Are Hiding These 4 Superpowers (Backed By Science)